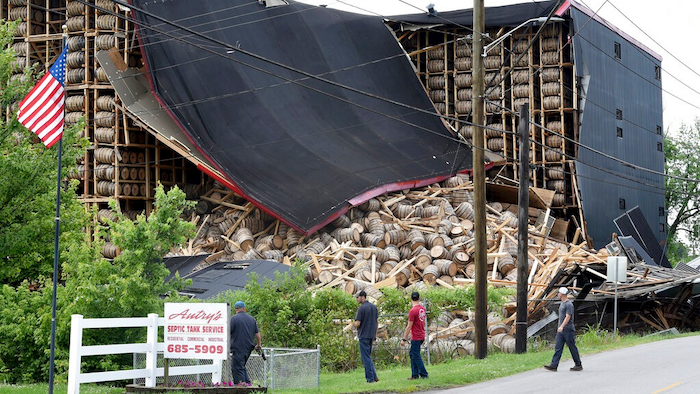 Workers from O.Z. Tyler Distillery look over Warehouse H, which collapsed during a thunderstorm shortly after midnight Monday, June 17, 2019 in Owensboro, Ky. Master Distiller Jacob Call says around 20,000 barrels are stored at the location and it appears that about 4,000 were affected.
Alan Warren/The Messenger-Inquirer via AP

OWENSBORO, Ky. (AP) — A Kentucky distillery says efforts are underway to recover thousands of barrels of bourbon at a massive storage warehouse that partially collapsed during a thunderstorm.

O.Z. Tyler Distillery in Owensboro said a section of the warehouse has been "successfully deconstructed" and the painstaking process of recovering barrels is moving ahead as part of an overall plan to eventually take down the entire building, called a rickhouse.

"We are very pleased with the progress moving into the weekend and realize it will take some time to remove all barrels from the site, but our first concern, and priority, is safety," master distiller Jacob Call said in an update posted on the distillery's website.

The deconstruction plan calls for a "controlled collapse" of the entire warehouse at some point, Call said.

No one was injured when part of the rickhouse collapsed early Monday. The distillery said "minimal leakage" of bourbon has been reported.

The distillery said 19,400 barrels were aging in the warehouse, including about 4,500 barrels in the storm-damaged section.

Barrels are being plucked from the warehouse with the use of an "ultra-high reach demolition excavator," the distillery said.

Damaged barrels will be either repaired or disposed of, and the bourbon will be "re-barreled" and moved to storage, it added.

O.Z. Tyler officials have been meeting daily with representatives of the federal Environmental Protection Agency as well as state and local officials.

Containment measures include an earthen berm around the warehouse, the distillery said. Chain link fencing and temporary concrete barricades are in place to secure the site, it said.