Largest Shipping Cranes to Operate in U.S. Have Arrived

Standing 170 feet tall, the Chinese-made gantry cranes towered over the ship that carried them through the mouth of the Chesapeake Bay. 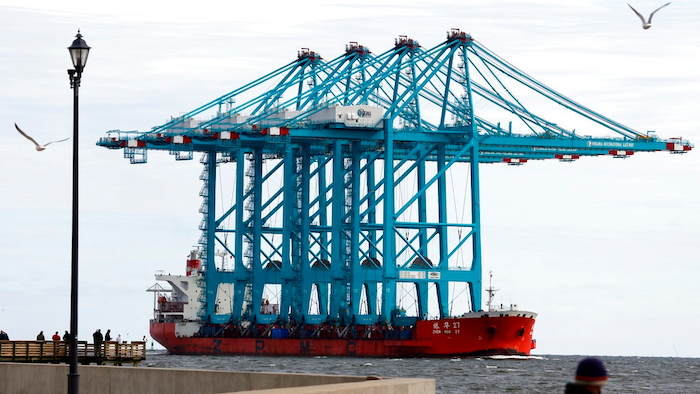 NORFOLK, Va. (AP) — What are said to be the largest cranes to operate at a U.S. commercial port arrived Monday in Virginia, marking the latest effort to accommodate the increasingly mammoth container ships that underpin international trade.

Standing 170 feet (52 meters) tall, the Chinese-made gantry cranes towered over the ship that carried them through the mouth of the Chesapeake Bay. Officials from the Virginia Port Authority said they will be the nation's largest.

"Having these cranes sail into our harbor says, very clearly, to the ocean carriers and the industry that we are prepared for the next evolution and the one to come after that," said John F. Reinhart, CEO and executive director of the Virginia Port Authority.

Shipping companies are using fewer but larger container ships to save on costs. And the recent expansion of the Panama Canal has increased ship traffic between Asia and the U.S. East Coast.

An "arms race" is underway as ports try to make room for the larger ships, said Robert McNab, an economics professor at Old Dominion University in Norfolk.

Projects include dredging deeper channels in Georgia and South Carolina. Part of a bridge was elevated to allow bigger ships to reach New York City-area ports.

The new cranes in Virginia should be up and running in about two months in Portsmouth, a city near the mouth of the Chesapeake Bay.

The cranes are part of an ongoing expansion-and-dredging project at the Port of Virginia, which also has terminals in the nearby city of Norfolk.

Cargo includes electronics, furniture and automobile parts comes in from all over the world and goes to cities such as Louisville, Kentucky, and Chicago. Ships leave the port carrying anything from logs from Appalachia to soybeans from Virginia.

The cranes' delivery to Virginia had come under threat over the summer as trade tensions escalated between the U.S. and China. President Donald Trump's administration had at one point proposed slapping tariffs on Chinese-made gantry cranes.

The port had approved spending $40 million for the cranes. A 25 percent tariff could have meant a $10 million cost increase that wasn't budgeted.

Reinhart, the port's CEO, shared his concerns with the Office of the United States Trade Representative. The cranes were eventually removed from a list of Chinese goods that were being considered for tariffs.

But that doesn't mean trade worries are over.

McNab, the economics professor, said there already are concerns that economic growth is slowing in the European Union and China.

A continued increase in trade tensions could lead to a global slowdown, he said. Demand for U.S. exports could fall. Prices on foreign imports could rise.

"It could take a bite out of traffic at the Port of Virginia and the other ports in the United States," he said.