As many as 9,000 barrels were impacted when part of the structure fell. 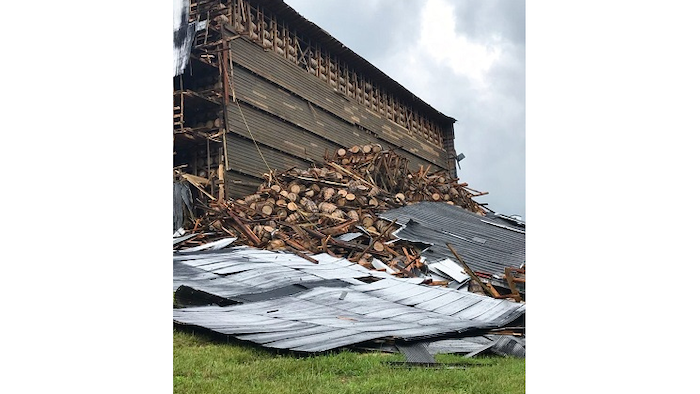 In this image provided by the Bardstown, Ky., Fire Department, debris is piled in a heap after a section of a bourbon storage warehouse at the Barton 1792 Distillery collapsed, Friday June 22, 2018, in Bardstown, Ky. Nelson County Emergency Management spokesman Milt Spalding says about 9,000 barrels filled with aging bourbon were affected.
Chief Billy Mattingly/Bardstown Fire Department via AP

LOUISVILLE, Ky. (AP) — Thousands of whiskey barrels crashed into a massive heap Friday when a large section of a decades-old storage warehouse collapsed at a distillery in the heart of Kentucky bourbon country.

The damaged warehouse at the Barton 1792 Distillery in Bardstown held about 18,000 barrels, and it appeared that up to half the barrels inside were affected, the distillery's owner said.

"We are assessing how many of the impacted barrels can be recovered," said Amy Preske, a spokeswoman for Sazerac, a Louisiana-based spirits company. "A mix of various distilled products at various ages were stored in that warehouse."

No cause had been determined for the late-morning collapse, but no one was injured, Preske said.

It could be days or weeks before the company fully assesses damage to the warehouse, built in the 1940s, she said.

"At this time, we do not know which Barton 1792 brands or customers will be impacted," she said.

The collapse won't affect normal operations at the distillery. It expects to be open for tours Saturday and to resume normal business operations Monday, Preske said in a statement.

The distillery began its normal seasonal shutdown for repairs and routine maintenance last week, she said. The collapse will not affect bourbon production once the distillery's summer shutdown ends, she said.

The distillery is near a waterway, and officials were checking on whether any whiskey had spilled into it. Initial water samples showed no signs of contamination, Nelson County Emergency Management director Joe Prewitt said.

The structure has a 12-foot (3.6-meter) basement to help contain spills, he said.

Officials from the Kentucky Department for Environmental Protection went to the scene, and distillery workers took a number of steps to minimize any environmental risk, Preske said.

About half the structure holding the rest of the barrels was still standing, said Milt Spalding, a spokesman for the local emergency management agency. Engineers who arrived Friday were looking at "trying to secure what was remaining and trying to contain what had fallen," he said.

Bardstown fire Chief Billy Mattingly said crews had been working on the warehouse earlier in the week.

No one was in the building when it collapsed, the company said.

Kentucky's bourbon sector is in the midst of a more than $1.1 billion boom that includes expanded production facilities, more storage warehouses and new tourism centers. Kentucky distillers have more than 6.6 million bourbon barrels aging, according to the Kentucky Distillers' Association, but the warehouse collapse Friday was a first for Prewitt.

"We've had some warehouse fires, but I can't recall having a collapse," he said.

The Barton distillery, established in 1879, includes 29 storage warehouses and 22 other buildings, according to its website.

Bourbon ages for years in charred new oak barrels, where it acquires its color and flavor.

Bardstown is about 40 miles (65 kilometers) south of Louisville.