The proposed changes to a state farm-protection law would block lawsuits alleging negligent or improper operations that create a nuisance. 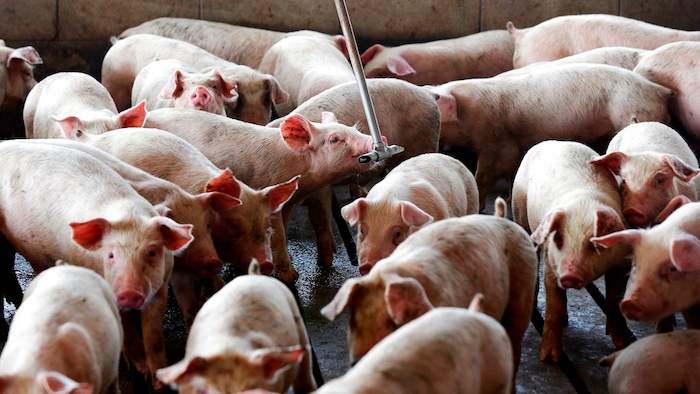 In this July 21, 2017, file photo, young hogs owned by Smithfield Foods gather around a water source at a farm in Farmville, N.C. Jury selection began Tuesday, May 29, 2018, in a Raleigh federal courthouse for the second trial over claims the method in which Hong Kong-owned, Virginia-based Smithfield Foods raises hogs caused a number of problems for neighbors after the operations moved in.
AP Photo/Gerry Broome, File

RALEIGH, N.C. (AP) — Legislators in the country's No. 2 hog-growing state on Tuesday stepped up efforts to shield industrial hog operations from neighbors who have complained for decades about the smell, noise and flies generated by housing thousands of animals together.

The state Senate's Agriculture Committee unveiled and approved language that would protect the low-cost but much-criticized method of handling hog waste. The proposed changes to a state farm-protection law would block lawsuits alleging negligent or improper operations that create a nuisance.

The legislation also presumes that farm and forestry operations couldn't be a nuisance if they're using practices common to their industry, such as the current hog-industry method of collecting waste in open-air cesspools and spraying it over farm fields.

That language could create additional risks for hog-farm operators who might want to adopt waste-disposal techniques that don't stink as much or prevent waste from rolling off fields into streams, said Duke University environmental attorney Michelle Nowlin.

"As long as what you're doing is the same as everybody else, it's not a nuisance," Nowlin said. "And so that means that if you try to innovate, if you try something new and maybe it fails, you're not protected in the same way that it would have been if you just decided to stay with the sorry methods you've been using."

The legislation's primary sponsors did not respond to calls or emails Tuesday asking for comment on why the legislation was introduced now, or what it sought to accomplish. The chief sponsors include Republican Sen. Brent Jackson, an agribusiness founder who represents Duplin and two other counties in an area that has the country's heaviest concentration of industrialized hog lots.

The move comes after a federal jury in April hit Smithfield Foods with a nearly $51 million verdict against an operation that forced neighbors to tolerate nuisance conditions. That was cut to about $3 million because the state limits damages for corporate misdeeds.

The second in a series of roughly two dozen trials filed by more than 500 eastern North Carolina neighbors is in its second week before a jury in a Raleigh courtroom.

The earlier verdict rocked the pork industry in a state where local and state politicians have either supported producers or backed down in the face of their clout since the 1980s.

Smithfield Foods Chief Executive Officer Ken Sullivan told The Associated Press last week that if the federal lawsuits succeed and are followed by others, even if they result in limited payouts, the division of the world's largest pork-producing company could reconsider its North Carolina presence.

Smithfield operates feed mills, company-owned farms and a half-dozen pork processing plants in North Carolina. Its operations include one of the world's largest slaughterhouses, in which Smithfield invested $100 million in the past year to expand.

Years ago, the company made similar threats to quit doing business in its home state of Virginia if that state increased environmental regulations, Nowlin said. Smithfield still operates in Virginia and isn't likely to bail out of North Carolina, she said.

"Its investments in North Carolina are so deep," she said. "It's not going anywhere."

Hong Kong-headquartered WH Group, which bought Smithfield Foods in 2013, generated $22 billion in revenues last year, the company reported in March. The vast majority of the 20 million hogs it produced last year are in the U.S. and Europe, the company said.