ATLANTA (AP) — Coca-Cola swung to a fourth-quarter loss after being hit with a $3.6 billion tax charged tied to a sweeping overhaul of the nation's tax laws.

Industry analysts have anticipated both as the company reshapes operations, and shares headed higher in early trading Friday.

"We achieved or exceeded our full year guidance while driving significant change as we continued to transform into a total beverage company," said CEO James Quincey. "While there is still much work to do, I am encouraged by our momentum as we head into 2018."

The Atlanta company reported a loss of $2.75 billion, or 65 cents per share. Earnings, adjusted for one-time gains and costs like the tax hit, came to 39 cents per share, which was a penny better than analysts had expected, according to a survey by Zacks Investment Research.

The results surpassed Wall Street expectations. The average estimate of nine analysts surveyed by Zacks Investment Research was for earnings of 38 cents per share, while six analysts expected in revenue.

Shares of Coca-Cola Co. rose more than 1 percent before the opening bell Friday. 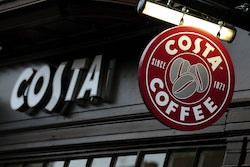