The company makes whiskey barrels out of white oak wood. 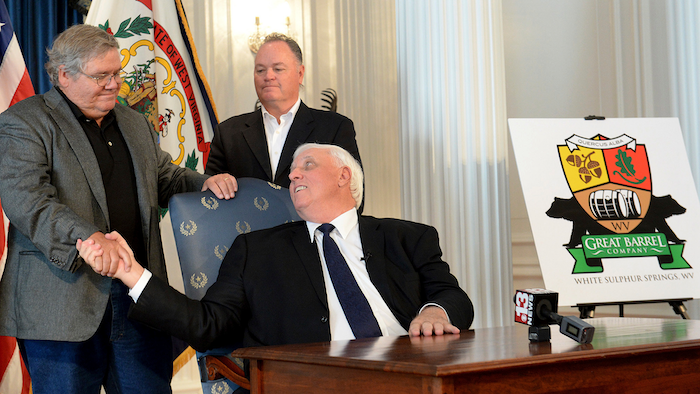 CHARLESTON, W.Va. (AP) — A new company that makes whiskey barrels out of white oak wood has been born from efforts to rebuild a devastated West Virginia community following deadly floods.

Officials announced at a news conference Thursday that the West Virginia Great Barrel Co. would be located in a 90,000-square-foot facility in Caldwell near White Sulphur Springs and bring 113 manufacturing jobs to Greenbrier County, along with 25 sawmill jobs.

Company spokesman Tom Crabtree, an architect and White Sulphur Springs resident, said groundbreaking on the facility will be in early 2018 and the first barrel will be produced in the first quarter of 2019.

Federal regulations require bourbon to be aged in a new, charred white oak barrel. Crabtree said the whiskey, bourbon and rye industry currently puts out 2 million barrels of product each year and is growing at an annual pace of 7 percent. He said that will mean a shortage of 600,000 barrels by 2019.

When the West Virginia plant reaches capacity, it will produce 700 barrels a day and 125,000 barrels each year using 13 million board feet of white oak, Crabtree said.

"We will be coming on into the marketplace at a perfect time," he said.

Crabtree was one of the creators of Hope Village, a 42-home community in White Sulphur Springs for people whose homes were destroyed in June 2016 flooding that killed 23 people statewide, including 15 in Greenbrier County.

"This idea, which some people thought was a little crazy when we started, it evolved out of the recovery from the flood," Crabtree said. "The people who invested in West Virginia to rebuild homes truly believed that rebuilding homes was just the beginning of the economic recovery of West Virginia. They have pulled together a group of 20 investors to make this project a reality and to complete the economic recovery, which only economic development can do."

West Virginia Economic Development Authority executive director David Warner says the authority's board on Thursday approved a $6 million loan for the company, to be coupled with $6 million in bank financing and $15 million from a group of investors. In addition, a sawmill will undergo a $3 million upgrade.

The project "epitomizes the absolute best in our state," he said. "It uses our raw products. It utilizes West Virginia investment and labor. And it's a real testimony to I think the governor's initiative by seeing this private investment."

"Today, we're changing that landscape," Justice said. He said the lowest-paying job at the company will be $40,000.

Justice hailed the move on the heels of announcements last month by Japanese truck maker Hino Motors Manufacturing to create up to 250 new jobs at a larger facility near Mineral Wells and by Toyota Motor Corp. to add a $115 million hybrid vehicle transmission production line at its facility in Buffalo.