American consumers buying seafood labeled "Caught in the USA, Processed in China" may inadvertently be subsidizing the government of Kim Jong Un as it builds nuclear weapons. 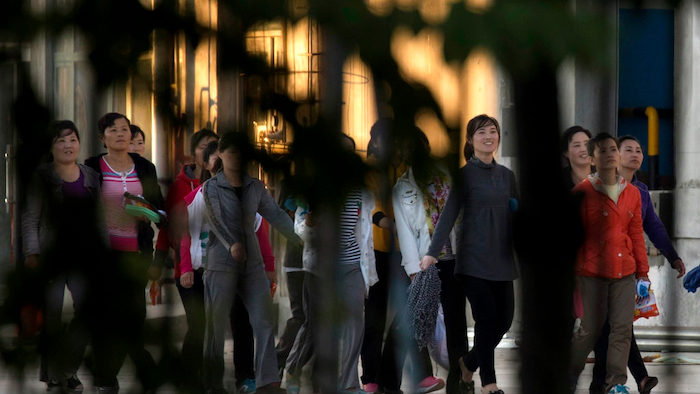 In this Aug. 31, 2017, photo, North Korean workers walk in a group to dormitories in the compound of the seafood processing factory Hunchun Pagoda in the city of Hunchun in northeastern China's Jilin province. Roughly 3,000 North Koreans are believed to work in Hunchun, a far northeast Chinese industrial hub just a few miles from the borders of both North Korea and Russia. The workers are paid a fraction of their salaries, while the rest - as much as 70 percent - is taken by North Korea’s government.
AP Photo/Ng Han Guan

U.S. Customs and Border Protection says it is ready to block U.S. imports of seafood — as well as any other goods — produced by North Korean laborers who work in China.

An Associated Press investigation tracked salmon, squid and cod processed by North Koreans working at Chinese factories and shipped to American stores, including Walmart and ALDI. The North Korean workers found in Chinese factories aren't allowed to leave, and receive only a fraction of their pay — most goes straight to the North Korean state. This means that American consumers buying seafood labeled "Caught in the USA, Processed in China" may inadvertently be subsidizing the government of Kim Jong Un as it builds nuclear weapons, and also supporting forced labor.

U.S. Customs and Border Protection said in a statement Thursday it is reviewing the allegations and if warranted, would "pursue all enforcement actions and prohibit goods from importation as appropriate." The companies that responded also vowed to investigate ties with suppliers.

GOP Congressman Chris Smith from New Jersey, who has repeatedly called for tougher enforcement, said the Labor Department has already identified trafficking in 12 sectors of goods exported by China.

"CBP should be stopping every shipment from those sectors — and now trafficking-tainted salmon too," he said.

A White House National Security Council spokesman said the North Korean government's scheme to outsource its labor underscores why the United States has pushed for restrictions on North Korean foreign workers. The spokesman said all countries should, at a minimum, ban companies from bringing in North Korean crews, as pledged in recent United Nations sanctions.

China is among the countries that have promised to comply, already banning imports of North Korean seafood, and saying no more North Korean workers will be allowed starting next year.

"But all nations must go further and reject what is clearly a despicable practice that only serves the regime's nuclear ambitions," said the NSC spokesman, who spoke on condition of anonymity because he wasn't authorized to comment.

Walmart said its supplier has addressed the problem, although it did not specify how. Walmart and ALDI said they are committed to human rights and fair labor practices, and expect the same from their business partners.

At a time when North Korea faces sanctions on many exports, the government is sending tens of thousands of workers worldwide, bringing in revenue estimated at anywhere from $200 million to $500 million a year. That could account for a sizable portion of North Korea's nuclear weapons and missile programs, which South Korea says have cost more than $1 billion.

"I am not surprised at all," said Anthony Talbott, who directs the University of Dayton's Human Rights Center. "North Korea has probably the single highest level of state-sanctioned slavery in the world, it's a major source of income for them."

Among those North Korean laborers in China, roughly 3,000 are believed to work in the northeast industrial hub of Hunchun, just a few miles from the borders of both North Korea and Russia. AP documented North Koreans in several Hunchun seafood processing plants, and tracked their supply chains to importers, including Sea-Trek Enterprises in Rhode Island, where managers said they are being inundated with phone calls from customers and suppliers since the AP story.

Sea-Trek's owners said that they hadn't visited China and were unaware of the makeup of the workers, but would immediately cease dealings with the plant until the situation is resolved.

Mark Liszt, owner of Lawrence Wholesale, a national food distributor in Southern California, said it would investigate its suppliers as well.

"We're middlemen," said Liszt. "We do make a practice of trying to go and visit the plants that we buy from in person, but it's not a perfect world that we can see into every single one."

Some U.S. brands and companies had indirect ties to the North Korean laborers in Hunchun, including Chicken of the Sea, owned by Thai Union. Trade records show shipments came from a sister company of the Hunchun factory in another part of China, where Thai Union spokeswoman Whitney Small says labor standards are being met and the employees are all Chinese. Small said the sister company should not be penalized.

"Now we need to ask, how many other products imported from China are made with North Korean labor?" he said.

Top Senate Democrat Chuck Schumer of New York said U.S. officials must keep products made by North Koreans out of the United States.

"The administration needs to ramp up the pressure on China to crack down on trade with North Korea across the board," he said.

Ohio's Democratic Sen. Sherrod Brown, who helped pass North Korea, Iran and Russia sanctions this summer, said corporations also have a responsibility to make sure they are abiding by U.N. sanctions and U.S. laws.

However, Bucknell University political science professor Zhiqun Zhu said a sanction-based approach that cracks down on imports isn't going to solve the problem.

"It has so many loopholes," he said. "All sticks and no carrots will not make the North Korea problem disappear."