The one-time distillery employee, accused of delivering tarp-draped barrels to customers, faces up to 15 years in prison. 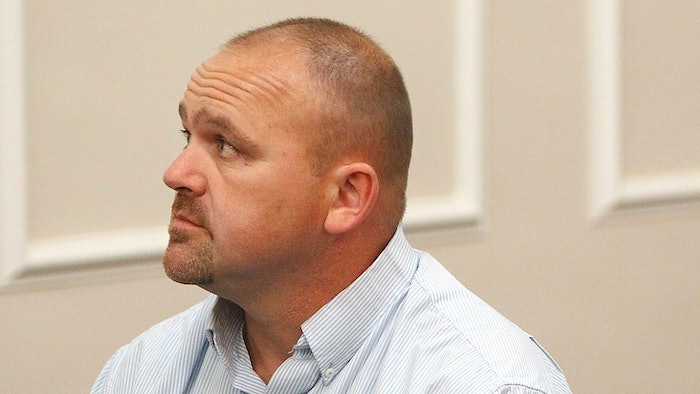 In a May 22, 2015 file photo, Gilbert "Toby" Curtsinger sits Franklin County Circuit Court in Frankfort, Ky. Curtsinger, accused as the ringleader of the operation that stole bourbon from a pair of Kentucky distilleries, pleaded guilty Wednesday, Sept. 20, 2017, to charges including theft by unlawful taking and receiving stolen property. The one-time Buffalo Trace distillery employee faces up to 15 years in prison.
Michael Clevenger/The Courier-Journal via AP, File

FRANKFORT, Ky. (AP) — A rogue distillery worker at the center of a bourbon-heist scheme that spirited away tens of thousands of dollars' worth of liquor has pleaded guilty in a case that has secured a place in Kentucky lore.

Gilbert "Toby" Curtsinger, accused as the ringleader of the operation that stole bourbon from a pair of Kentucky distilleries, entered the plea Wednesday in Franklin County Circuit Court to charges including theft by unlawful taking and receiving stolen property.

The one-time Buffalo Trace distillery employee, accused of delivering tarp-draped barrels to customers, faces up to 15 years in prison.

"This case is one that has a romantic aspect to it, has a very Kentuckiana aspect to it ... but in the end, this is a property theft crime," prosecutor Zachary Becker said after the plea.

The thefts included hard-to-get and pricey brands such as Pappy Van Winkle bourbon that was taken from the Buffalo Trace Distillery. The thefts also targeted the Wild Turkey distillery.

Sheriff Pat Melton has estimated the recovered whiskey was worth at least $100,000.

Defense attorney Whitney Lawson said the plea agreement was the best decision for Curtsinger and his family.

"This was a decision that was made by my client so that he can find some peace and some resolution to this," Lawson told reporters.

Curtsinger will be sentenced after the case against one last defendant is resolved. Standing beside his attorney, Curtsinger showed no emotion Wednesday as he answered questions from the judge regarding the plea agreement.

Both distilleries targeted by the scheme are in Kentucky's famed bourbon country, and the heists and resulting criminal case garnered widespread attention.

Curtsinger, who worked on the Buffalo Trace loading docks, distributed the whiskey through a syndicate that included members of his recreational softball team, authorities said.

Curtsinger loaded whiskey barrels into a pickup truck, covered them with a tarp and hauled them to potential buyers, a Franklin County sheriff's detective said previously in describing the operation. Curtsinger wore a Buffalo Trace shirt and presented himself to customers as a distillery employee, the lawman said.

Curtsinger was indicted in 2015 after the Franklin County sheriff's office received an anonymous tip that several missing Wild Turkey bourbon barrels were stashed on his property.

Armed with a search warrant, sheriff's officers found barrels containing bourbon behind an outbuilding on the property. The barrels had been sanded and spray painted black on the tops and bottoms in what authorities believed was an effort to remove the distiller's marks.

Curtsinger had previously pleaded not guilty to charges that included engaging in organized crime and receiving stolen property over $10,000.

With one case still pending, Melton said Wednesday he didn't foresee any additional charges in the bourbon thefts.

"I said that we would solve this case, and we have," he said.

Investigators said they cracked not only whiskey thefts but a steroid-trafficking scheme as part of the investigation. Curtsinger on Wednesday also pleaded guilty to misdemeanor charges stemming from the steroid operation.

Eight people have pleaded guilty in the bourbon-heist case, Becker said. Sentences have been delayed pending resolution of the cases.

Once the criminal cases are concluded, another big issue still looms: what to do with the confiscated bourbon. Becker has had discussions about the purloined barrels and the spirits they hold.