Millions of eggs have been destroyed after it was discovered they had been contaminated with an insecticide. 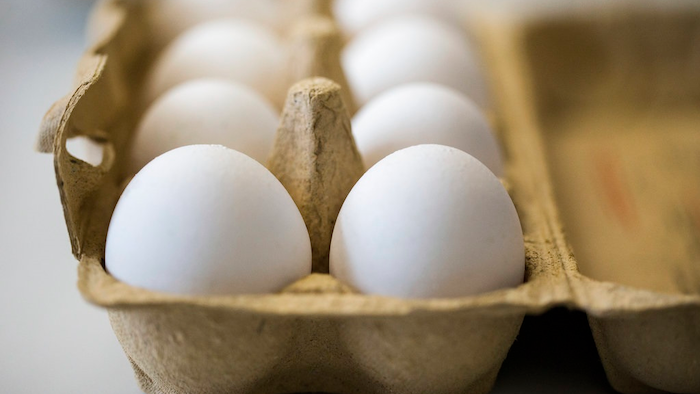 In this photo taken Monday, Aug. 7, 2017 Eggs are kept fresh in an egg-box in a laboratory of the Chemical and Veterinary Investigation Office in Krefeld, Germany. Dutch investigators detained two men Thursday who are suspected of being involved in the illegal use of pesticide at poultry farms that sparked a massive food safety scare in several European countries.
Marcel Kusch/dpa via AP

BRUSSELS (AP) — The European Union said Friday that it plans to hold an extraordinary meeting late next month over a growing tainted egg scandal as it revealed that products contaminated with an insecticide have now spread to 17 countries.

Millions of eggs have been destroyed or pulled from supermarket shelves since July 20, when it was made public that the pesticide Fipronil, which is dangerous to human health, was found mixed with another treatment sprayed on chickens for ticks, fleas and lice, known as Dega 16.

Almost all lab tests show that only very low levels of Fipronil — seven to 10 times lower than the maximum permitted — have been detected in eggs from the treated chickens, although one test in Belgium was above the European limit. Poisoning by small doses has few effects and requires little treatment. Heavy and prolonged exposure can damage the kidneys and liver or cause seizures.

The scandal has caused major political fallout, with neighbors Belgium, the Netherlands and Germany squabbling over who is to blame, and who knew what and when. Poultry farmers have been hardest hit, and are blaming the chemical industry for compromising their business and exposing consumers to danger.

The EU's executive Commission said Friday that contaminated eggs have been found at producers in four countries; Belgium, France, Germany and the Netherlands. Eggs or egg products from those producers have reached Austria, Britain, Denmark, Ireland, Italy, Luxembourg, Poland, Romania, Slovenia, Slovakia and Sweden, as well as Switzerland and Hong Kong outside the EU.

The Commission announced that it is aiming to hold talks between EU ministers and food safety agencies concerned on Sept. 26.

"The aim is to draw the relevant lessons and discuss the ways to continuously improve the effectiveness of the EU system to deal with food fraud," Commission spokeswoman Mina Andreeva said.

She said the EU's "priority remains to manage the situation, to continue to coordinate and to reassure our citizens."

Travert said on RMC radio Friday that some 244,000 eggs imported from the Netherlands and Belgium and sold in France were affected.

He said test results received overnight from the French food safety agency on affected eggs and egg products showed "the level of contamination does not present a risk for the consumer."

France has also confirmed one farm in the Nord-Pas de Calais region was found to have used Fipronil, and is now blocked from selling eggs.

The Agriculture Ministry says the French farm reported on July 28, as the scandal was coming to light, that Dega 16 had been used on the farm by a Belgian subcontractor, and the ministry claims no eggs concerned have been sold.

Danish food safety authorities say 20 tons of boiled and peeled eggs linked to the pesticide scandal were sold in recent months to a distributor in Denmark, which in turn sold them to canteens, cafes and catering companies in the country.

The agency said Thursday the Danish distributor, Danaeg Products, has been ordered to recall the eggs because "the content is illegal" but "not dangerous."

She noted that there are rapid alert systems that should be used if consumers are at risk.

"There must be no compromises when it comes to food safety," Reinhard said. "Information needs to be shared between (EU) member states without delay."

In Poland, Jan Bondar, a spokesman for the Chief Sanitary Inspectorate, said that an estimated 40,000 potentially contaminated eggs have been imported but were not sold to consumers. He said the eggs came from the Netherlands and were delivered by a German company. Contamination hasn't been confirmed but they came from farms where contaminated eggs were found. He said the eggs would either be destroyed or returned to the producer.