It is the first of tens of thousands of U.S. lawsuits. 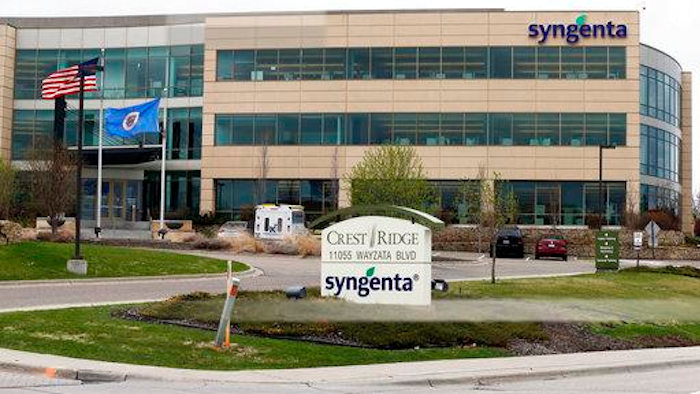 This April 18, 2017 photo shows the suburban Minneapolis headquarters of Syngenta in Minnetonka, Minn. The first lawsuit out of tens of thousands across the country is about to go to trial against Swiss the agribusiness giant Syngenta over its decision to put a genetically engineered corn variety onto the U.S. market before China had approved it.
AP Photo/Jim Mone

MINNEAPOLIS (AP) — The first of tens of thousands of U.S. lawsuits will go to trial on Monday against Swiss agribusiness giant Syngenta over its decision to introduce a genetically engineered corn seed variety to the U.S. market before China approved it for imports.

The lawsuits allege Syngenta's move wrecked an increasingly important export market for U.S. corn and resulted in price drops that hurt all producers. Court filings show Syngenta aggressively marketed the seeds even when it knew Chinese approval was going to be a problem.

Plaintiffs' experts estimate the economic damage at about $5 billion, though Syngenta denies its actions caused any losses for farmers.

Monday's trial in state court in Minneapolis will mark the first test case. The second goes to trial in federal court in Kansas City, Kansas, on June 5. The two cases are meant to provide guidance for how the complex web of litigation in state and federal courts could be resolved.

Here are a look at some of the issues:

Syngenta decided to commercialize its Viptera brand of genetically modified corn seeds before China approved importing it. Syngenta invested over $100 million and 15 years in developing Viptera, which has a trait called MIR162 that protects against pests such as earworms, cutworms, armyworms and corn borers.

With U.S. government approval, Syngenta began selling Viptera in the U.S. for the 2011 growing season. But China didn't approve it until December 2014.

Court papers show that Syngenta initially assured stakeholders that China would approve MIR162 in time for the 2011 crop. But the date kept slipping. Some exporters sent shipments containing the trait to China anyway. After two years of accepting them, China began rejecting them in late 2013.

One expert working for the plaintiffs estimated the damage to U.S. farmers to be $5.77 billion; another pegged it at $4.68 billion.

Most plaintiffs didn't grow Viptera, but China excluded their grain, too, because elevators and shippers typically mix grain from large numbers of suppliers, making it difficult to source corn that was free of the trait. So they say all farmers were hurt by the resulting price drop.

About 60,000 individual cases involving farmers from across the country, plus a class-action lawsuit on behalf of Minnesota farmers, are consolidated before Hennepin County District Judge Thomas Sipkins. Syngenta's North American seed business is based in suburban Minneapolis.

The other big bloc, which includes cases from corn belt states other than Minnesota, has been consolidated before U.S. District Judge John Lungstrum in Kansas City, Kansas. The lawyers themselves aren't sure how many farmers are covered there, but it's a lot.

The first two cases will serve as bellwether trials, which courts often use when there are large numbers of lawsuits concerning similar legal issue. This way the attorneys can see how juries react and determine whether to settle other cases or take them to trial.

The trial that starts Monday in Minneapolis is for a lawsuit filed by Daniel Mesnick of Morse Bluff, Nebraska, who grew Viptera and claims about $150,000 in damages. It is expected to last up to three weeks.

The second trial will take place in federal court in Kansas City and will be a class-action case involving Kansas farmers who claim about $200 million in damages.

"By the middle of July we should have one individual farmer and one class trial under our belt, which should give everybody a lot of information about how juries view these facts and what damages should be awarded," said Lew Remele, lead attorney for the Minnesota individual plaintiffs.

A few thousand other less advanced cases have been consolidated with a federal judge in Illinois, while lawsuits by grain handlers including Cargill and Archer Daniels Midland are pending in Louisiana.

Sipkins last year denied Syngenta's motion to dismiss the case, ruling that the company had a duty to control the timing, manner and scope of taking Viptera to market. This January, Sipkins ruled that the plaintiffs' attorneys had found enough evidence to meet the legal requirements for seeking punitive damages, and his order contained harsh words for Syngenta.

"There is evidence that Syngenta was at least disingenuous, perhaps mendacious at worst, about the timing of Chinese approval to induce farmers to buy and plant Viptera," Sipkins wrote. He also said Syngenta was "less than forthright" about the anticipated approval date to dissuade grain elevators from refusing to take Viptera, which would have deterred farmers from planting it.

Syngenta attorney Mike Jones said the company sold a legal product fully approved for sale in the U.S. and other key importing countries, and that it complied with industry standards for international marketing. The company also argues that China's rejection had no meaningful impact on U.S. corn prices.

Syngenta points to U.S. Department of Agriculture figures showing that China was just a small market for U.S. corn in 2010 when Syngenta launched Viptera. The company says it was larger market forces, and not China's decision, that drove prices down.

Jones said corn prices fell sharply in 2013, even before China rejected its first shipment, because of a bumper U.S. crop that brought prices down from record highs. Jurors will see evidence that the rejections conveniently let the Chinese walk away from contracts they signed when prices were much higher, he said.