Genetically engineered sugarcane produces oil in its leaves and stems for biodiesel production. It even produces more sugar. 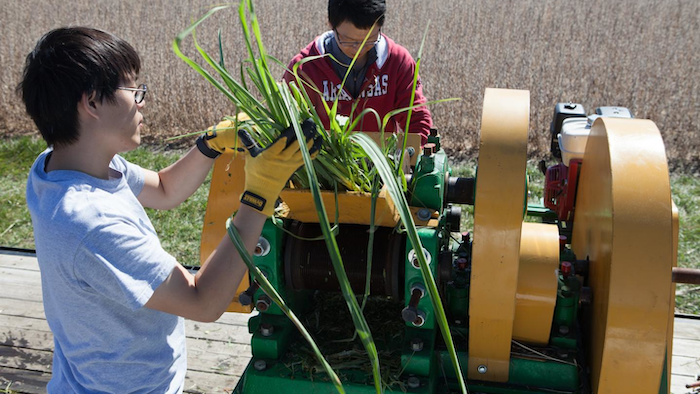 Researchers extract juice from sugarcane that has been engineered to produce oil for biodiesel in addition to the plant's sugar that is used for ethanol production.
Kathryn Faith/University of Illinois

A multi-institutional team led by the University of Illinois have proven sugarcane can be genetically engineered to produce oil in its leaves and stems for biodiesel production.

Surprisingly, the modified sugarcane plants also produced more sugar, which could be used for ethanol production.

More importantly, sugarcane can be grown on marginal land in the Gulf Coast region that does not support good corn or soybean yields.

"Instead of fields of oil pumps, we envision fields of green plants sustainably producing biofuel in perpetuity on our nation's soil, particularly marginal soil that is not well suited to food production," said Stephen Long, Gutgsell Endowed Professor of Plant Biology and Crop Sciences.

Long leads the research project Plants Engineered to Replace Oil in Sugarcane and Sweet Sorghum (PETROSS) that has pioneered this work at the Carl R. Woese Institute for Genomic Biology at Illinois.

"While fuel prices may be considered low today, we can remember paying more than $4 per gallon not long ago," Long said. "As it can take 10-15 years for this technology to reach farmers' fields, we need to develop these solutions to ensure our fuel security today and as long as we need liquid fuels into the future."

Published in Biocatalysis and Agricultural Biotechnology, this paper analyzes the project's first genetically modified sugarcane varieties. Using a juicer, the researchers extracted about 90% of the sugar and 60% of the oil from the plant; the juice was fermented to produce ethanol and later treated with organic solvents to recover the oil. The team has patented the method used to separate the oil and sugar.

They recovered 0.5 and 0.8 percent oil from two of the modified sugarcane lines, which is 67% and 167% more oil than unmodified sugarcane, respectively. "The oil composition is comparable to that obtained from other feedstocks like seaweed or algae that are being engineered to produce oil," said co-author Vijay Singh, Director of the Integrated Bioprocessing Research Laboratory at Illinois.

"We expected that as oil production increased, sugar production would decrease, based on our computer models," Long said. "However, we found that the plant can produce more oil without loss of sugar production, which means our plants may ultimately be even more productive than we originally anticipated."

To date, PETROSS has engineered sugarcane with 13 percent oil, 8 percent of which is the oil that can be converted into biodiesel. According to the project's economic analyses, plants with just 5 percent oil would produce an extra 123 gallons of biodiesel per acre than soybeans and 350 more gallons of ethanol per acre than corn.

Currently, the project is seeking commercial investors to achieve 20 percent oil production, the theoretical limit according to the project's computer models.

EU to Use U.S. Soybeans for Fuel

EU to Use U.S. Soybeans for Fuel