"Samsung feeds about 30 percent of our people," said one citizen. ''We must not humiliate Samsung internationally." 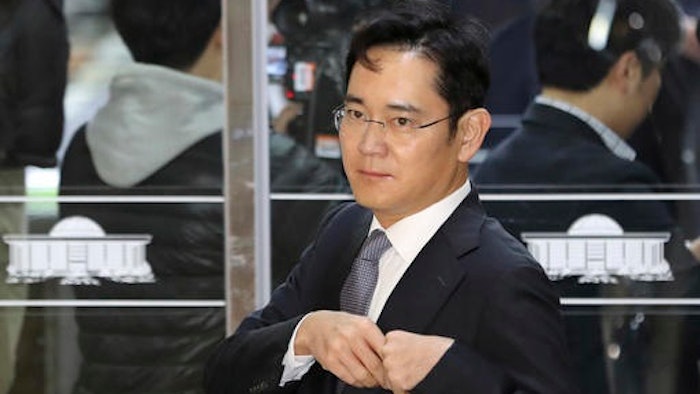 SEOUL, South Korea (AP) — The family smartphones? An assortment of Samsung Galaxies. The flat-screen TV that illuminates the living room? A Samsung SUHD, with the brand name sparkling on the nameplate. The maker of the digital toilet seat? You guessed it: Samsung.

It's difficult for people outside South Korea to fully grasp what Samsung, a truly global brand, means inside its home country, where it is far more than just another big company. It is seen variously as both a talisman and a millstone, as national savior and greedy business behemoth. Those diverse views only intensified Thursday when a court rejected prosecutors' request to arrest Samsung heir and Vice Chairman Lee Jae-yong in the corruption scandal surrounding impeached South Korean President Park Geun-hye.

Samsung is inextricably woven into the psychological fabric of this small, proud country, where a reverence for wealth, power and prestige is linked to rapid economic growth after the Korean War, when authoritarian government policies favored big businesses.

A complex mix of admiration and resentment was on full display when Lee, held by authorities for more than 12 hours, was released Thursday after a court said there was not "enough justification for a (formal) arrest at this stage."

Many South Koreans flooded social media with complaints that the court decision showed their country remains in thrall to Samsung and other big chaebol, the conglomerates that dominate the nation's economy, jobs and investment.

"There was no justice when the judicial system threw a cold blanket on this opportunity to change a rotten society," said Lee Jong-ran, a labor lawyer and Samsung critic who added that the judge "overturned a desperate chance to crack the chaebol system."

But the prospect of the Samsung heir's arrest also stirred anger, and even worries that it could harm the country's economy.

"Samsung feeds about 30 percent of our people," said Han Hyo-jung, a 72-year-old self-described "patriot." ''I think it's too much to put him in detention. ... We must not humiliate Samsung internationally."

Samsung played a major role as South Korea, formally known as the Republic of Korea, rose from the rubble of war and the anguish of dictatorship and colonization into an Asian powerhouse.

This is reflected in a longtime nickname that mixes the joking and the bitter: The Republic of Samsung.

"It's still the nameplate company of the nation, and it's the ideal place to get a job. It brings joy, prestige and wealth to graduates and their families," Geoffrey Cain, a Seoul-based journalist writing a forthcoming book on Samsung, said in an email. But "this is where the problems start. Since it's indispensable to the nation, in this Republic of Samsung, there's a lot of resentment over its power."

Lee, 48, who has been de facto Samsung chief since his father's 2014 heart attack, embodies the love-hate relationship.

In a country where many young people struggle to find a job, Lee controls a fortune estimated at nearly $6 billion thanks to his father, who ordered Samsung companies to sell his son shares at illegally cheap prices whose value skyrocketed later, giving him massive, quick wealth without having to pay big inheritance taxes. Lee's management skills remain unproven, though he was groomed his entire adult life to lead the jewel of the family dynasty, Samsung Electronics, which, along with its affiliated companies, accounts for about a third of the market value in South Korea's main stock market.

He is the public face of a company that, in a familiar refrain, can hover over a South Korean from cradle to grave. Its presence is breathtaking:

Don't have a Samsung smartphone? Even iPhones have Samsung memory chips.

You can go to a Samsung amusement park and stay at a Samsung hotel. You can buy gifts at Samsung duty-free shops, wear Samsung clothes and protect yourself with Samsung insurance. Even if you don't get a coveted job at Samsung, your employer is likely to rely on the conglomerate — for advertising, say, or to cater the food in the company cafeteria, or as a crucial customer.

Even if a South Korean somehow avoided all of those ties, the national pension fund, the world's third-largest, is a huge investor in Samsung companies.

And what would happen if Samsung collapsed? Park Sang-in, a professor at Seoul National University, estimates it would trigger a 7 percentage point rise in the nation's unemployment rate, the collapse of its insurance industry and overall economic woes not seen in South Korea since the Asian financial crisis of the late 1990s.