Super Bowl Will Have 360-Degree Replays

The replay technology is called "Be the Player." 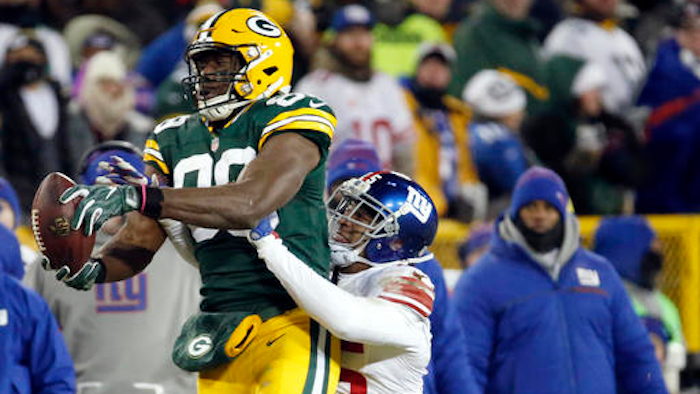 BOSTON (AP) — Have you ever wanted to know what Tom Brady sees as he stares down a pass rush, scans the field for an open receiver ... or brushes his teeth in the morning?

This year's Super Bowl broadcast could be just what you're looking for.

Thanks to a 360-degree replay technology called "Be the Player," Fox TV broadcasters will be able to show a play from virtually any spot in the stadium within minutes of the action taking place. The spin around and zoom "freeD" system has been used at other sporting events — including the NBA and baseball All-Star Games and the Olympics — but this will be the first that goes the last step and shows things from the athlete's perspective .

"The difference here is you would be able to go in and see from his vantage point what the player actually saw," said Zac Fields, a senior vice president for graphic technology and integration at Fox Sports Group. "It's something that most of us have never been able to see before. The vantage point that most of us have on TV is really different than what the guys see on the field. That's what the promise of this technology is."

Intel is rolling out the new technology at this year's Super Bowl, and promoting it in an ad that will feature Brady in his everyday life — waking up, making breakfast, brushing his teeth — with the tagline: "Intel replay 360 makes anything look epic." As the Patriots quarterback snarfs down a pancake, the camera spins around to a new angle and shows the crumbs falling from his mouth.

And, if New England makes it to the Feb. 5 Super Bowl in Houston, there will be even more opportunities to see things from Brady's perspective.

"It's something that fans have always dreamed about: 'What did Tom see when he threw that pass?'" Jeff Hopper, the general manager of strategy and marketing for the Intel Sports Group, told The Associated Press in advance of the announcement. "Everyone wants to be the player, to see what it's like to see it from that point of view."

To make the "Be the Player" video possible, Intel has installed 38 separate 5K resolution cameras in a perimeter inside NRG Stadium, creating what Hopper calls "a volumetric capture of everything that's going on on the field." The cameras are connected by five miles of fiber optic cables to a special control room, where a half-dozen Intel producers, working with one from the Fox Sports broadcast, can pick out and package the replays that will be used in the broadcast.

The massive amount of data — about 1 terabyte per 15-30 second clip — allows producers to position a "virtual camera" anywhere it wants — including, virtually, inside a player's helmet. (Early versions even toyed with superimposing a facemask on the screen, though that has apparently been dropped.) It will take about two minutes to produce the clips, meaning it's not yet ready for instant replay but could, for example, be available to show a new view of a touchdown by the time the teams are done with the extra point or kickoff.

In an interview in Boston's Back Bay this week, Hopper said there could be up to 20 "Be the Player" replays, though ultimately it is up to Fox to decide how to use it.

"It will depend upon the story you are trying to tell," Fields said. "It's not something we're planning on using because it is a new bell and whistle. It is a storytelling tool, and that's how we're planning to utilize it."

Right now, use of the system is limited to big events: It took about a month to retrofit the stadium in Houston with all of the equipment needed for the freeD data capture. Also, each 15-30 clip consists of about 1 terabyte of data.

But Hopper said new stadiums are already being built with the cameras in mind.

"Anyone who's building a new stadium now is saying, 'What do we need to do to make it freeD ready?'" he said. "Because everyone sees it as the future."

Eventually, Hopper said, the technology will not be limited to storytelling.

Teams and leagues are hoping to mine the data to improve performance. In the X-Games, Hopper said, the athletes were eager to figure out how high they jumped and use that information to tune their techniques — or just brag about big air with the competition.

In time, coaches will be able to use the video to see what their player saw, instead of relying on overhead shots of the field. And, as the turnaround time quickens, the technology would also help replay reviews by giving officials the ability to freeze the action and zoom in at any angle to look, for example, to see whether a player's knee was down before the ball popped out.

"We're working with pretty much the entire sports world," Hopper said. "All the leagues, all the teams. I don't think there's anyone that we're not. We can't do them all, but we're talking with them all."

And Hopper envisions a sports world where every fan will be able to immerse himself in the game on his phone or a virtual reality headset — not just view the shots curated by a TV producer sitting in a trailer next to the stadium.

"That's good; I think it's interesting. But the transformative nature of what we're working on is: Everybody gets to do it themselves," Hopper said. "Ultimately you'll be able to be on the field, with the players — the best players in the world — whatever sport that is, whether it be soccer, football or cricket, whatever. You'll be able to be part of the action. I don't think you can get any more immersed."