Soybeans account for less than 1 percent of all the goods and services the United States sells the rest of the world. But somehow the humble legumes are upstaging weightier, thornier issues as the Trump administration tackles trade disputes with China, the European Union and other trading partners. 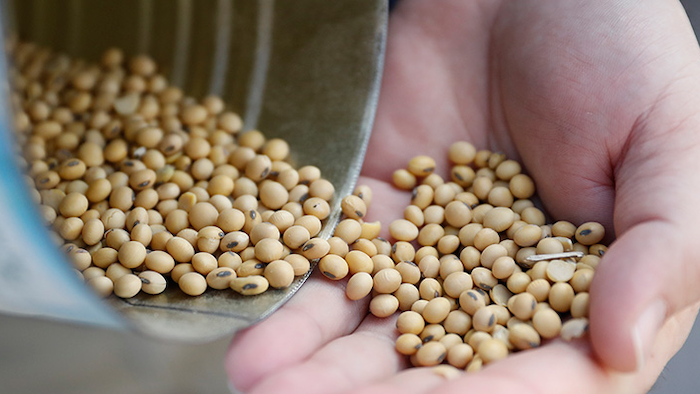 FILE- In this April 5, 2018, file photo Matt Aultman, a grain salesman and feed nutritionist with Keller Grain & Feed, Inc., shows locally grown soybeans during an interview at their facilities in Greenville, Ohio. Soybeans, which account for less than 1 percent of U.S. exports, are upstaging weightier issues as the Trump administration tackles trade disputes with China and other countries. (AP Photo/John Minchillo, File)

WASHINGTON (AP) — Soybeans account for less than 1 percent of all the goods and services the United States sells the rest of the world.

But somehow the humble legumes are upstaging weightier, thornier issues as the Trump administration tackles trade disputes with China, the European Union and other trading partners. Critics worry that focusing on getting foreigners to buy soybeans and other U.S. goods is a distraction from the push them to make deeper economic reforms that would offer longer-lasting benefits to the United States.

The outsize importance of soybeans — mostly used as animal feed but also consumed by humans in everything from General Tso's Tofu to soy lattes — was apparent again recently in two days of U.S.-China trade talks.

The world's two biggest economies didn't make much progress on their differences over the aggressive tactics — including cybertheft — that Beijing is allegedly using to challenge U.S. supremacy in cutting-edge industries like driverless cars and artificial intelligence.

But to the president's delight, they did agree on one thing: In an unexpected deal that even surprised the top U.S. trade negotiator, China said that it would buy 5 million metric tons of American soybeans over an unspecified period.

"China as a sign of goodwill has agreed to purchase a tremendous, massive amount of soybeans," Trump told reporters.

He said he had consulted with Agriculture Secretary Sonny Perdue and learned that "our farmers are extremely happy."

"It's a nice kind of olive branch," said Peter Meyer, head of grain and oilseed analytics at S&P Global Platts.

FILE- In this April 5, 2018, file photo Matt Aultman, a grain salesman and feed nutritionist with Keller Grain & Feed, Inc., shows locally grown soybeans during an interview at their facilities in Greenville, Ohio. Soybeans, which account for less than 1 percent of U.S. exports, are upstaging weightier issues as the Trump administration tackles trade disputes with China and other countries. (AP Photo/John Minchillo, File)

Soybeans, which accounted for just $21.5 billion of $2.4 trillion in U.S. exports in 2017, seem to be punching above their weight in U.S. trade policy.

Farming is one of the few areas in which the United States sells more to the rest of the world than it buys, China included. Powerful lobbies represent American agricultural interests in Washington. And farmers tend to be enthusiastic Trump supporters.

The emphasis on soybeans has drawbacks, critics say. In the confrontation with China, for example, it diverts attention from the tough tech issues that divide the world's two biggest economies and may decide whether Beijing or Washington presides over the economy of the future. And it implies that the Chinese might be able to avoid substantive concessions on their economic policies simply by agreeing to buy more American stuff and putting a dent in the massive U.S. trade deficit with China. That amounted to $336 billion in 2017 and was likely higher last year.

"There's confusion about what the administration's objectives are," said Rufus Yerxa, president of the National Foreign Trade Council and a former U.S. trade official.

In a letter last week, Senate Minority Leader Chuck Schumer of New York and fellow Democratic Sens. Ron Wyden of Oregon and Sherrod Brown of Ohio warned Treasury Secretary Steven Mnuchin that any deal with China should force Beijing to end the abusive practices that put U.S. tech firms at a competitive disadvantage and to enact fundamental economic reforms that would make the Chinese market more accessible to U.S. and other foreign firms.

An agreement that settles for Chinese purchases of American goods, intended to narrow the trade deficit, would be viewed on Capitol Hill as "an abject failure," they wrote.

Soybeans have taken a prominent place in previous Trump administration trade talks. The United States and the European Union at least temporarily backed away from a potential trade war over cars last July when the Europeans agreed, among other things, to load up on American soybeans.

America's trading partners are well aware of the outsize influence farmers enjoy in Washington. When Trump last year started slapping import taxes on Chinese goods and on foreign steel and aluminum, they targeted their retaliation on the American Heartland, imposing tariffs on soybeans and other farm products.

China's soybean tariffs had a devastating effect. Before the trade hostilities erupted last year, China bought nearly 60 percent of the soybeans the United States exported. Then the tariffs kicked in: In the first 10 months of 2018, U.S. soybean exports to China dropped to 8.2 million metric tons from 21.4 million metric tons a year earlier — a 62 percent freefall, according to the U.S. Department of Agriculture.

"We need some good news," said Blake Hurst, a soybean and corn farmer in northwestern Missouri's Atchison County and president of the Missouri Farm Bureau.

So Hurst and other farmers welcomed China's decision to buy American beans. But their relief is limited. Hurst worries it's a one-time purchase and not the resumption of business as usual.

"It's still woefully short of what they used to do," said Ron Moore, who grows corn and soybeans in Roseville, Illinois and serves as chairman of the American Soybean Association. "We're not there yet."

Even after U.S.-China trade tensions ease, soybean industry consultant John Baize said it might be a good idea for the U.S. and China to scale back their soybean trade. The economic and geopolitical rivals are likely clash again over issues such as trade, Taiwan and Chinese territorial claims in the South China Sea. Soybeans could once again be held hostage.

So Baize says the U.S. should sell more to other markets — such as Southeast Asia, Pakistan and Egypt — where demand for soybeans is growing as people earn more money and eat more meat, increasing the need for animal feed. Meanwhile, China should buy more from alternative suppliers like Brazil that probably aren't potential adversaries, he said.

Darlene Superville and Deb Riechmann in Washington contributed to this story.