About 3.4 million chickens and turkeys and 5,500 hogs have been killed in flooding from Florence as rising North Carolina rivers swamped dozens of farm buildings where the animals were being raised for market, according to state officials. 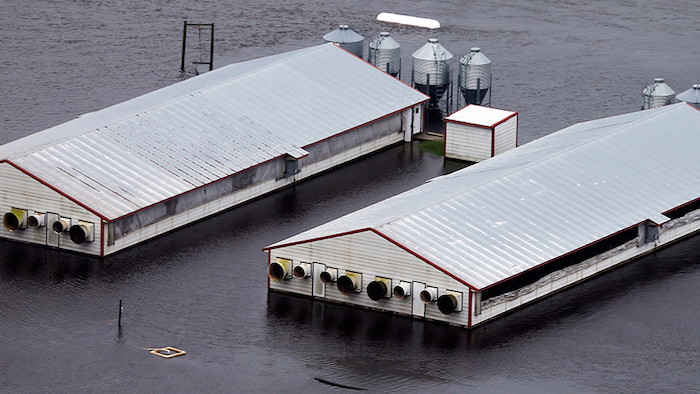 About 3.4 million chickens and turkeys and 5,500 hogs have been killed in flooding from Florence as rising North Carolina rivers swamped dozens of farm buildings where the animals were being raised for market, according to state officials.

The N.C. Department of Agriculture issued the livestock mortality totals Tuesday, as major flooding is continuing after the slow-moving storm's drenching rains. Sixteen North Carolina rivers were at major flood stage Tuesday, with an additional three forecasted to peak by Thursday.

The Department of Environmental Quality said the earthen dam at one hog lagoon in Duplin County had breached, spilling its contents. Another 25 of the pits containing animal feces and urine have either suffered structural damage, had wastewater levels go over their tops from heavy rains or had been swamped by floodwaters. Large mounds of manure are also typically stored at poultry farms.

North Carolina is among the top states in the nation in producing pork and poultry, with about 9 million hogs at any given time and 819 million chickens and 34 million turkeys raised each year.

The N.C. Pork Council, an industry trade group, said the livestock losses from the storm should be taken in the context.

"Our farmers took extraordinary measures in advance of this storm, including moving thousands of animals out of harm's way as the hurricane approached," the group said in a statement issued Tuesday. "We believe deeply in our commitment to provide care for our animals amid these incredibly challenging circumstances."

The industry lost about 2,800 hogs during flooding from Hurricane Matthew in 2016.

Sanderson Farms, a major poultry producer in the state, said it lost about 1.7 million chickens after flooding at more than 60 of the independent farms that supply its poultry processing plants. The company said its facilities suffered no major damage, but supply disruptions and flooded roadways had caused shutdowns at some plants.

In addition, about 30 farms near Lumberton have been isolated by flood waters, hampering the delivery of feed to animals. The lack of food could cause additional birds to die if access isn't restored quickly, the company said.

Smithfield Foods, the world's largest pork producer, said its plants also suffered no significant damage and are operating at limited capacity. The company said it would ramp up production as roads become passable.