Hundreds of California farmers rallied at the Capitol on Monday to protest state water officials' proposal to increase water flows in a major California river, a move state and federal politicians called an overreach of power that would mean less water for farms in the Central Valley. 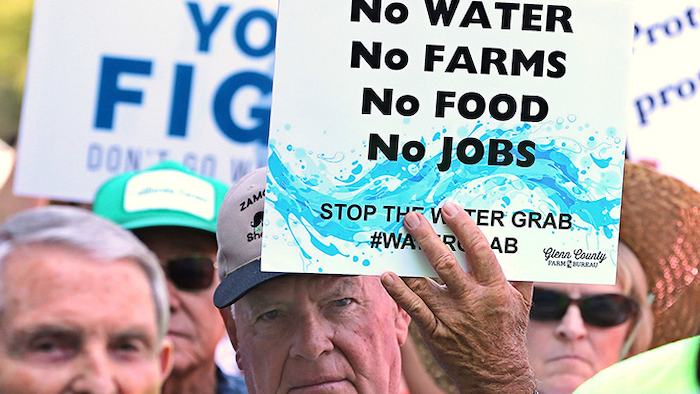 California farmers rally at the Capitol to protest a proposal by state water officials to increase water flows for the lower San Joaquin River to protect fish, at the Capitol, Monday, Aug. 20, 2018, in Sacramento, Calif. The State Water Resources Control Board is holding hearings this week concerning a plan to allow more water to flow freely down the Sacramento-San Joaquin River Delta from February to June, meaning less water will be available for farming and other needs. (AP Photo/Rich Pedroncelli)

SACRAMENTO, Calif. (AP) — Hundreds of California farmers rallied at the Capitol on Monday to protest state water officials' proposal to increase water flows in a major California river, a move state and federal politicians called an overreach of power that would mean less water for farms in the Central Valley.

"If they vote to take our water, this does not end there," said Republican state Sen. Anthony Cannella. "We will be in court for 100 years."

Environmentalists and fishermen offered a different take on the other side of the Capitol to a much smaller audience.

"For the 50 years corporate agriculture has been getting fat," said Noah Oppenheim of the Pacific Coast Federation of Fishermen's Associations. "Salmon fisheries have been tightening belts."

The charged rhetoric came a day before the California State Water Resources Control Board was set to discuss its proposal to change water flows in the Sacramento-San Joaquin River Delta, which supplies water for the majority of California's people and massive swaths of farmland.

The plan would double the amount of water that must flow freely through the Low San Joaquin River and three of its tributaries from February to June, meaning less water can be diverted for farming or other needs. It's an effort to protect the state's declining salmon population; the state estimates just 10,000 fall-run salmon returned to the San Joaquin Basin in 2017, compared to 70,000 in 1985. The change is an attempt to mimic natural water flows that help the salmon thrive.

State water officials have called the Delta an "ecosystem in crisis."

How California manages and uses its water has long been a topic of hot political debate, falling more along regional lines than partisan ones and pitting agricultural interests against environmental ones. Beyond farming interests, politicians in the Central Valley say the plan would limit their access to drinking water.

The water board has postponed its final vote on the plan to an unspecified date.

The Trump administration has also weighed in. Interior Secretary Ryan Zinke called it a "water grab" that would "cripple the Central Valley's economy, farms and community," after visiting the region with Republican U.S. Rep. Jeff Denham in July. He urged the state water board to delay its vote.

Increasing flows would harm the federally-managed Central Valley Project's ability to move and store water through its network of dams and reservoirs, Zinke has argued. On Friday he tasked his staff with developing a plan to help maximize water deliveries, construct new water storage and reassess legal interpretations around California's water management.

Several farmers at the Capitol rally said the water board's move would hurt their businesses.

"They want to control every drop of water in the state of California," said Harry Holland, a rancher in Browns Valley, an unincorporated community north of Sacramento.

Supporters of the plan, though, had a different take.

"The salmon are on the brink of extinction in the Central Valley," said Peter Drekmeier, policy director of the Tuolumne River Trust. "It's not just for the environment — it's for the fishers and all the people who enjoy salmon."