Parts of Missouri are so dry that corn crops are suffering and hay for cattle is in short supply, with water becoming increasingly scarce, experts say. 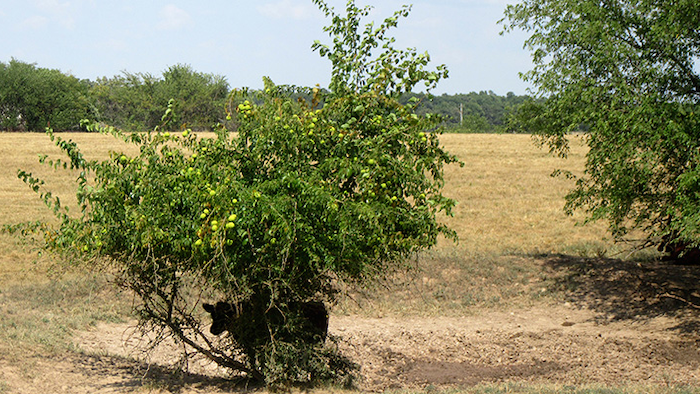 ST. LOUIS (AP) — Parts of Missouri are so dry that corn crops are suffering and hay for cattle is in short supply, with water becoming increasingly scarce, experts say.

Missouri has had below-average rainfall since winter. The U.S. Drought Monitor map shows that nearly all of Missouri is experiencing drought, with several counties in the northwestern part of the state facing "exceptional" conditions — the most dire classification assigned by the monitor. Conditions were nearly as bad elsewhere along the northern tier and in southwestern Missouri.

Much of the western U.S. is also experiencing drought. But Missouri is the only Midwestern state with such severe conditions. Parts of Kansas also are extremely dry, but most of Illinois and Nebraska, and the northern half of Iowa, are drought-free.

"That isolated nature really hurts some corn growers because they're competing against other farmers in the Midwest that have had bumper crops," said Mark Fuchs, hydrologist for the National Weather Service office near St. Louis. "That puts a lot of them on the brink of financial ruin."

The U.S. Department of Agriculture lists soil moisture as "short" or "very short" in four-fifths of the state. As for Missouri's corn crop, nearly half of it was listed as poor or very poor, according to the most recent USDA progress report. Only about a quarter was listed as good or excellent.

The drought has also hurt pastures, with about three-quarters in poor or very poor conditions, according to the USDA report. Many pastures haven't been able to support grazing cattle, prompting farmers to feed cattle with hay that might normally be saved for winter. It's also hurt the hay crop, which is down about one-third from normal.

"It has been a very bad summer following a very bad winter as far as the feed supply," said Eldon Cole, a University of Missouri Extension livestock specialist out of Mt. Vernon. "The winter was so long last year they had to feed hay until April. That caused them to run out of hay, and then we didn't have a good growing season."

Kent Arnaud, 57, said this year's drought may be the worst since 1980 at the 1,500-acre (607-hectare) cattle farm he operates with his father and son near Monett in southwestern Missouri. Arnaud said he and his relatives are scrambling to find enough feed for the cattle over the winter. They've even sold off some calves early so they won't have to feed them in the cold-weather months. The calves are typically sold in November or December.

"Unless we get an awfully good fall, we're going to be pretty nervous going into the winter," Arnaud said. "We need several rounds of soaking rain and cooler temperatures."

Some farmers unable to sell drought-damaged corn were using it for cattle feed, Cole said.

"If we could squeeze that out of the atmosphere, that would certainly be helpful," Fuchs said.