Photo of the Day: Fast-Food Strikes Push for Higher Wages

Fast-food workers are set to turn out in support of higher wages in cities across the country Thursday. Organizers say walkouts are planned in 100 cities, with rallies set for another 100 cities. But it's not clear how many of the participants are workers and what impact they'll have on restaurant operations. 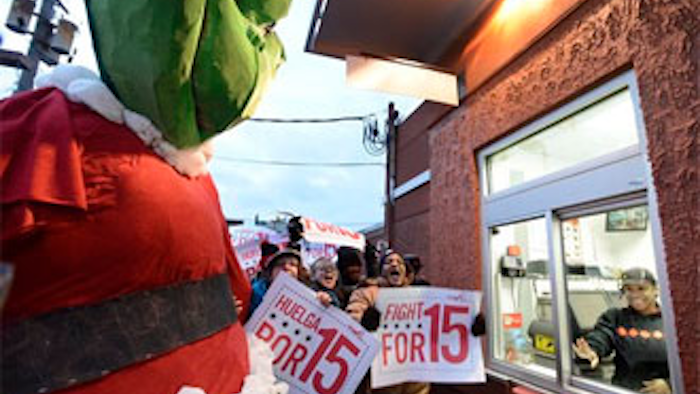 Demonstrations planned in 100 cities are part of a push by labor unions, worker advocacy groups and Democrats to raise the federal minimum wage of $7.25. (AP Photo/Paul Beaty)

NEW YORK (AP) — Fast-food workers and labor organizers are set to turn out in support of higher wages in cities across the country Thursday.

Organizers say walkouts are planned in 100 cities, with rallies set for another 100 cities. But it's not clear what the actual turnout will be, how many of the participants are workers and what impact they'll have on restaurant operations.

The actions would mark the largest showing yet over the past year. At a time when there's growing national and international attention on economic disparities, labor unions, worker advocacy groups and Democrats are hoping to build public support to raise the federal minimum wage of $7.25, or about $15,000 a year for full-time work.

In New York City, about 100 protesters carrying signs, blowing whistles and beating drums marched into a McDonald's at around 6:30 a.m.; one startled customer grabbed his food and fled as they flooded the restaurant, while another didn't look up from eating and reading amid their chants of "We can't survive on $7.25!"

Community leaders took turns giving speeches for about 15 minutes until the police arrived and ordered protesters out of the store. The crowd continued to demonstrate outside for about 45 more minutes while a handful of customers remained inside. A McDonald's manager declined to be interviewed and asked that customers not be bothered.

Tyeisha Batts, a 27-year-old employee at Burger King, was among those taking part in the demonstrations planned throughout the day in New York City. She said she has been working at the location for about seven months and earns $7.25 an hour.

"My boss took me off the schedule because she knows I'm participating," Batts said.

She said she hasn't been retaliated against but that the manager warned that employees who didn't arrive on time Thursday would be turned away for their shifts. Batts said she can get only between 10 and 20 hours of work a week because her employers don't want to give her enough hours to qualify as a full-time employee. Under the health care overhaul, employers will be required to provide health care coverage to full-time employees.

Despite the growing attention on economic disparities, the push for higher pay in the fast-food industry faces an uphill battle. The industry competes aggressively on low prices and companies have warned that they would need to raise prices if wages were hiked. Most fast-food locations are also owned and operated by franchisees, which lets companies such as McDonald's Corp., Burger King Worldwide Inc. and Yum Brands Inc. say that they don't control worker pay.

However, labor advocates have pointed out that companies control many other aspects of the operations through their franchise agreements, including menus, suppliers and equipment.

Fast-food workers have historically been seen as difficult to unionize, given the industry's high turnover rates. But the Service Employees International Union, which represents more than 2 million workers in health care, janitorial and other industries, has been providing considerable organizational and financial support to the push for higher pay over the past year.

Berlin Rosen, a political consulting and public relations firm based in New York City, also has been coordinating communications efforts and connecting organizers with media outlets.

The National Restaurant Association, an industry lobbying group, said most those protesting were union workers and that "relatively few" workers have participated in past actions. It called the demonstrations a "campaign engineered by national labor groups."

In the meantime, Senate Majority Leader Harry Reid, D-Nev., has promised a vote on the wage hike by the end of the year. But the measure is not expected to gain traction in the House, where Republican leaders oppose it.

Supporters of wage hikes have been more successful at the state and local level. California, Connecticut and Rhode Island raised their minimum wages this year. Last month, voters in New Jersey approved a hike in the minimum to $8.25 an hour, up from $7.25 an hour.