All Shell, No Shock: Lobster Prices Strong, Season Picks Up

New England's lobster industry faces big new challenges in selling to Europe and China, but the trouble hasn't caused prices to budge much for American consumers. 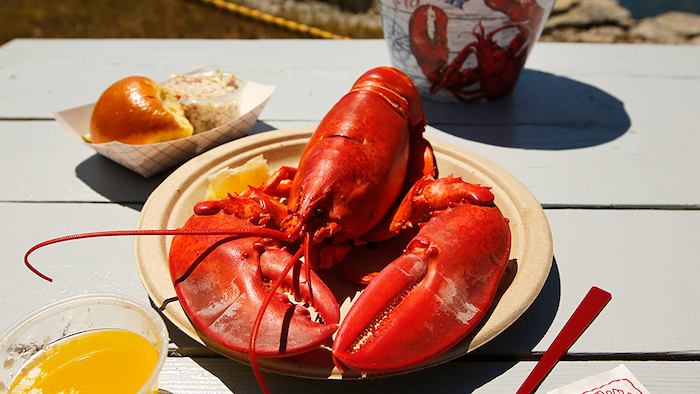 The business is in the midst of its busiest part of the year, when tourists flock to coastal states with a beachside lobster dinner in mind. Summer is also when prices tend to fall a bit because it's when the majority of lobsters are caught.

But the prices haven't fallen much. Retailers are selling live lobsters in the $7 to $12 per pound range in Maine, where the American lobster industry is based. That's not too far behind recent summers.

"It's starting to pick up, so of course the price is dropping. But that's pretty normal," said William Adler, a lobsterman out of Green Harbor, Massachusetts. "Now it's starting to come alive, and prices are still good right now."

Members of the industry are concerned about heavy new tariffs applied by China to U.S. seafood this month, because that country is a major lobster buyer. Canada also recently brokered a deal with the European Union to remove tariffs on Canadian lobster exports to Europe, while the U.S. has no such agreement.

But the tariffs do not appear to be hurting the U.S. business right now, in part because the summer season is more about domestic consumption than overseas sales, said Kristan Porter, president of the Maine Lobstermen's Association.

One of the reasons the tariffs aren't affecting lobster prices in the U.S. is that lobstermen catch a lot of soft-shell lobsters, also called shedders, in the summer, Porter said. Hard-shell lobsters are preferable for shipping because shedders are less likely to survive the journey.

"How many shedders go to China? You can ship them all you want," Porter said. "I know it has been dropping, but the price has been decent."

Despite the solid prices, some in the industry are concerned about what will happen with the volume of catch this year. About four-fifths of the nation's lobster catch comes to land in Maine, and the state's haul dropped by about 16 percent, to 110.8 million pounds, last year.

Catch has been somewhat slow in Casco Bay, a key lobster fishing area in southern Maine, but there's still a lot of fishing left to do this summer, said Steve Train, a lobsterman from Long Island, Maine.

"It comes on in fits and spurts, then a place that did well dies," he said. "I would say we're well below average."

The industry also can't get too comfortable because the China tariffs represent a long-term threat. The Maine congressional delegation has called the lobster industry an "irreplaceable piece of our state's economy that supports thousands of jobs" and could be hurt by an escalating trade war with China.

Environmental groups that monitor commercial fishing are watching, too, because of potential changes to the lobster supply chain and fisheries for bait, such as herring.

"All of these markets that these industries have worked for decades to cultivate in China, and now they are all at risk," said Gib Brogan, fisheries campaign manager for Oceana.