SAN FRANCISCO (AP) — The owners of a South San Francisco salami plant will pay nearly $700,000 and overhaul its refrigeration system as part of a federal judgment stemming from an ammonia leak that sickened almost four dozen people.

Seventeen people were hospitalized and 30 others sought medical attention after built-up pressure caused a pipe to burst and sent 200 pounds of anhydrous ammonia into the air.

Employees of the biotechnology firm Genentech were among those sickened, and the company reached a confidential settlement with Columbus Foods last year. 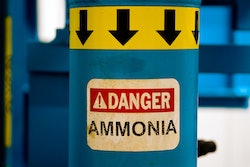