Much of U.S. manufacturing has been decimated in the past decade by less expensive imports from China, but it didn't have to be that way, according to a compelling new book by journalist Beth Macy. "Factory Man" tells the story of one manufacturer who fought back.

WASHINGTON (AP) — Much of U.S. manufacturing has been decimated in the past decade by less expensive imports from China, but it didn't necessarily have to be that way, according to a compelling new book by journalist Beth Macy.

Macy's book, "Factory Man," tells the story of one manufacturer who fought back. John Bassett III, a wealthy scion of a furniture dynasty in southwestern Virginia, responded to a flood of overseas goods by modernizing his factory and restructuring its products. More controversially, he successfully petitioned the U.S. government for protective tariffs on imported Chinese furniture, alienating many of his retailer customers. Those efforts kept his company, Vaughan-Bassett, in business.

Yet perhaps even more interesting is the book's vivid resurrection of the little-known history of the region, which dominated global furniture manufacturing for most of the 20th Century. That history includes intense family rivalries. Before taking on China, John Bassett was kicked out of his family's namesake company, Bassett Furniture, by an ambitious brother-in-law, who had help from Bassett's own sister.

In an interview with The Associated Press, Macy discussed the colorful history of the Bassett family and the larger lessons of the book:

The Associated Press: What motivated you to pursue this story?

Beth Macy: In Henry County, Virginia, 19,000 people, which is half the workforce, have lost their jobs. ... First the textiles went, and then the furniture. So what happened to all these people that were left behind? What's that look like? ...When I write about economics, I write from the ground up.

AP: Your book features many unique characters, but are there larger lessons here? Could every factory owner have done more to save some of their plants, as Bassett did?

He had to reinvent the way he did everything. He didn't just take on China, he redesigned the factory, he made it more efficient, he pumped the (tariff) duty money back in, he started a free clinic for his workers, he started worker incentives.

Everybody (else) was closing their factories. It was almost like it was the cool thing to do. There was a phrase in the furniture industry, 'The dance card is filling up.' If you don't get over there and get signed up with a factory (in China) to make your stuff, you're going to be left out in the cold.

AP: Did you expect such a Southern Gothic story, with all the family intrigue? Apparently a Bassett family patriarch fathered a child with an African-American maid.

Macy: That was just the worst-kept secret ever. I heard about it the first time I went there.

AP: The furniture-makers fought successfully against unions and kept wages low. You tell the story of workers who were making $6 an hour after decades in the industry. Did you ever think that these jobs weren't worth saving?

Macy: That's what the economists think. One economist I interviewed said, 'We shouldn't even be making furniture in America.' And what I say to that is, you should go interview some of these displaced workers, who would crawl on their belly like a snake to have that job back again. Because what I see, are people working part-time at Wal-Mart, and on food stamps. ... It's just so out of touch with working-class America.

The Future of Warehouse Logistics

How VR Can Improve Manufacturing Post-COVID-19

How Industrial Organizations Can Integrate Compliance Without Burdening Employees 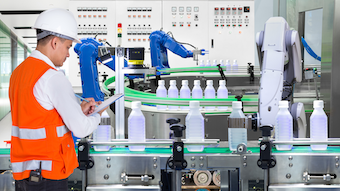 Manufacturers Are Underusing Robots in Their Production Lines

Despite advanced capabilities, robots are mostly used in just a handful of production areas. How can managers think outside the box to further deploy them?
Feb 9th, 2021

A Business Case for the Circular Economy

Besides reducing their strain on the environment, there are some major business benefits for manufacturing companies taking a circular approach.
Feb 9th, 2021

Capital spending projects in the industry were expectedly down from 2019. Get a full breakdown of activity throughout 2020 here.
Feb 2nd, 2021

How will manufacturers know that their employees are prepared for working closely with autonomous machines?
Oct 4th, 2020
Follow Us
Most Recent