Mars Recognized as One of the World's Best Multinational Workplaces

Mars, known for its M&M's, Snickers and Twix brands, was recognized as one of the World's Best Multinational Workplaces by Great Place to Work. Employees benefit from free candy, Mars drinks and opportunity to bring their pet to work. 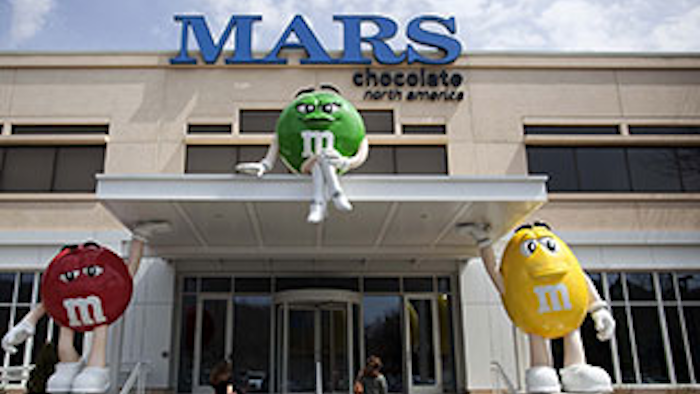 MCLEAN, Va. (PRNewswire) — Mars, Incorporated is honored to be recognized as one of the World's Best Multinational Workplaces by Great Place to Work®, being ranked 22 on a list of 25 companies. The ranking is the world's largest annual study of workplace excellence, identifying the top 25 best multinationals in terms of workplace culture.

As in 2013, the list once again noted Mars' internal training and development programs, as well as high percentage of women in management positions.  Mars has gradually increased the proportion of women in management roles each year, currently achieving 40 percent globally.  Additionally, the list is an affirmation to Mars' Associates feeling engaged and the company continues to strive to create a workplace that retains and attracts great people.

"You can't talk about Mars unless you talk about people. In most manufacturing businesses, the leaders are thinking about equipment, assets, metrics, and the bottom line — but Mars clearly understands that we can't get any of that without people. When I started, my conversations with Mars leadership were all focused on supporting me," says James "JR" Smith, Associate at Mars Petcare US.

At Mars, Associates can benefit from open offices that encourage camaraderie and collaboration, creating a fun and motivating workplace; not to mention the free candy, Mars drinks and opportunity to bring their pet to work.  The company was also credited by Great Place to Work® in other key areas for its unique working environment and Associate culture including: wellness programs, and local and global volunteering opportunities.

"Earning a place among this year's World's Best Multinational Workplaces is a great achievement," says China Gorman, CEO of Great Place to Work®. "These organizations are creating a consistent, high-trust culture around the world. This is good for their employees, for their business prospects and for our global society."

Mars as a Great Place to Work around the World
In 2013, Mars was also ranked on more than 20 great workplace lists globally, including being featured on Best Multinational Workplaces in Europe by Great Place to Work.  In 2014, Mars has been named on Great Place to Work and other national workplace ranking lists in Australia, Belgium, Brazil, Central America and Caribbean,Chile, China, Denmark, Europe, France, Germany, Greece, India, Ireland, Italy, Japan, Korea, Mexico, Poland,Portugal, Spain, Sweden, Switzerland, and the United States.  Additionally, in 2014, Mars made The Times Top 100 Graduate Employers List in the UK, climbing four places from 52nd last year to 48th this year.

About Mars, Incorporated
In 1911, Frank C. Mars made the first Mars candies in his Tacoma, Washington kitchen and established Mars' first roots as a confectionery company. In the 1920s, Forrest E. Mars, Sr. joined his father in business and together they launched the MILKY WAY® bar.  In 1932, Forrest, Sr. moved to the United Kingdom with a dream of building a business based on the objective of creating a "mutuality of benefits for all stakeholders" – this objective serves as the foundation of Mars, Incorporated today. Based in McLean, Virginia, Mars has net sales of more than $33 billion, six business segments including Petcare, Chocolate, Wrigley, Food, Drinks, Symbioscience, and more than 75,000 Associates worldwide that are putting its Principles into action to make a difference for people and the planet through its performance.

About the World's Best Multinational Workplaces List:
Great Place to Work's annual World's Best Multinational Workplaces List ranks the top 25 global companies to work for. Qualifying companies must have been selected for at least five national Great Place to Work® lists, have at least 5,000 employees worldwide and count at least 40 percent of their global workforce outside of the company's home country.