Those two and others are all trying to grab a slice of the plant-based market, which is still dwarfed by the conventional meat market but growing fast. 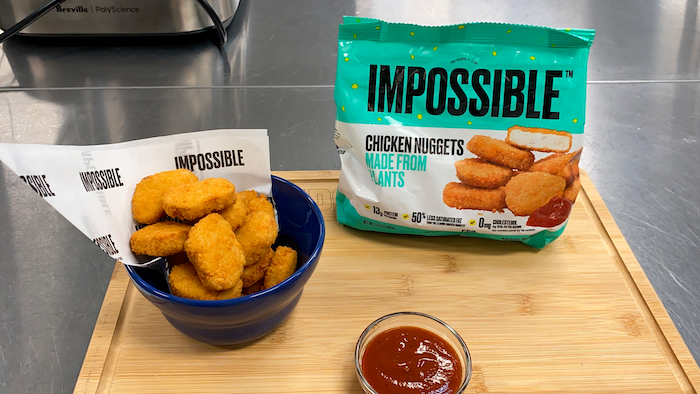 Beyond Meat and Impossible Foods found success with realistic plant-based burgers. Now, they're hoping to replicate that in the fast-growing but crowded market for plant-based chicken nuggets.

Beyond Meat said Monday that its new tenders, made from fava beans, will go on sale in U.S. groceries in October. Walmart, Jewel-Osco and Harris Teeter will be among the first to offer them.

Impossible Foods began selling its soy-based nuggets this month at Walmart, Kroger, Albertsons and other groceries. They’ll be in 10,000 stores by later this year.

The rival startups, both based in California, helped redefine what plant-based burgers could be. Beyond burgers were the first to be sold in grocery aisles next to conventional meat in 2016; Impossible burgers joined them a few years later.

But this time, Beyond and Impossible will be stacked in freezers already bursting with plant-based chicken options. More than 50 brands of plant-based nuggets, tenders and cutlets are already on sale in U.S. stores, according to the Good Food Institute, which tracks plant-based brands.

Some, like Morningstar Farms and Quorn, have been making plant-based meat for decades. But Beyond and Impossible have also spawned a host of imitators making realistic products marketed to omnivores, not just vegans and vegetarians. Fifteen percent of those 50 brands were new to the U.S. market in 2020, like Nuggs, from New York startup Simulate, and California’s Daring Foods.

They’re all trying to grab a slice of the plant-based market, which is still dwarfed by the conventional meat market but growing fast. U.S. sales of frozen, plant-based chicken tenders and nuggets jumped 29% to $112 million in the 52 weeks ending Aug. 28, according to Nielsen IQ. Sales of conventional frozen tenders and nuggets rose 17% to $1.1 billion in the same period. 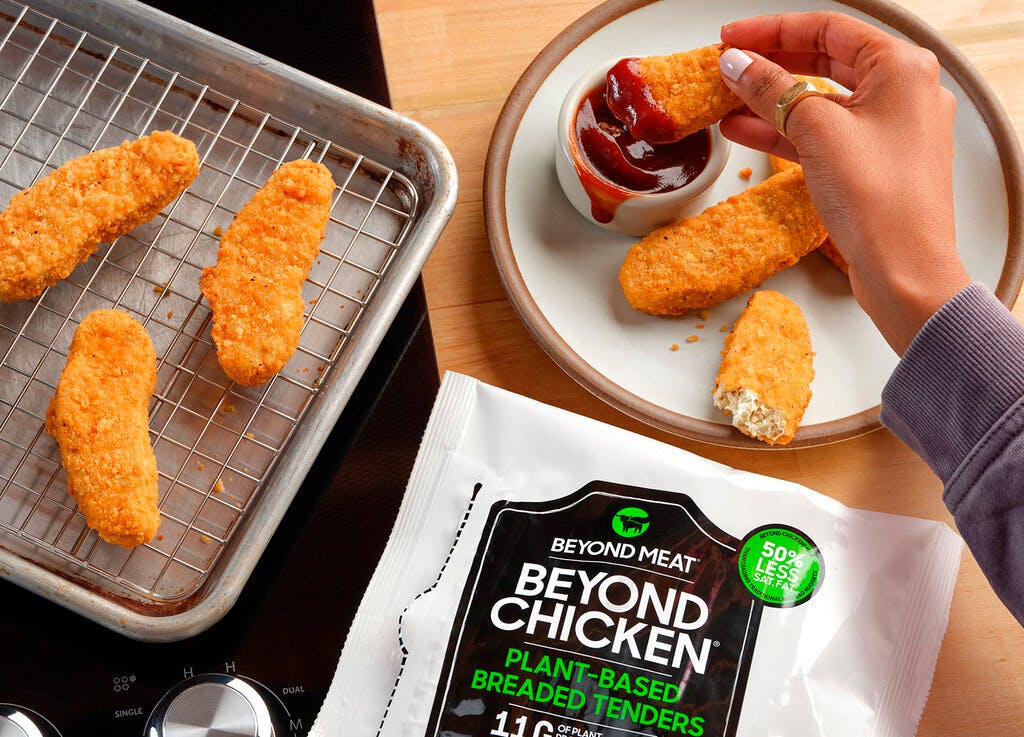 Tom Rees, an industry manager with Euromonitor, said plant-based meat sales were already growing before the coronavirus hit. In Euromonitor surveys, nearly a quarter of consumers worldwide say they are limiting meat intake for health reasons.

But the pandemic gave plant-based meat a boost as consumers looked for new things to cook at home. Rees said meat shortages and coronavirus outbreaks at meat production facilities also made consumers think twice about the animal meat market.

Impossible Foods Vice President of Product Innovation Celeste Holz-Schietinger said it was important to start with plant-based burgers because beef production is a bigger contributor to climate change. But Impossible spent the past year developing the plant-based tenders as part of a goal is to replace all animal agriculture with more sustainable alternatives by 2035.

Beyond Meat has been experimenting with chicken for even longer. The El Segundo, California-based company launched chicken strips in 2012. But it pulled them from the market in 2019, citing the need to devote more manufacturing capacity to its burgers.

Unlike the new fava bean-based tenders, Beyond’s burgers are made with pea protein. Beyond President and CEO Ethan Brown said the company has spent more than a decade researching various protein sources and their attributes and doesn’t want to limit itself to just one.

Dariush Ajami, Beyond’s chief innovation officer, said mimicking the fibrous texture and fat distribution in chicken was the biggest challenge with the new tenders. The company is still far from perfecting a plant-based chicken breast or a marbled steak, but has 200 scientists and engineers working on it, he said.

“The goal is to reduce that gap between our product and animal meat,” he said.

There’s also a price gap. Beyond Meat’s suggested retail price for an 8-ounce package is $4.99, while Impossible’s 13.5-ounce package costs $7.99. Tyson Foods sells a 2-pound bag of chicken nuggets at Walmart for $5.76.

But it’s clear many people are eager to try plant-based foods. In July, Panda Express quickly sold out of Beyond Meat orange chicken in a trial run at locations in Los Angeles and New York. Panda Express says it’s exploring a wider rollout of the product, which was specially developed for the brand.

Jasmine Alkire recently tried Beyond Meat orange chicken at a Panda Express in Los Angeles. Alkire became a vegetarian seven years ago, but the Beyond chicken tasted similar to the orange chicken she grew up eating.

“It was flavorful and didn’t have a weird aftertaste or off-putting texture,” she said.

For now, Beyond Meat has several advantages. It has partnerships with big brands like KFC and McDonald’s and has already opened its first manufacturing plant in China, where Impossible’s products aren’t yet sold.

Impossible is still waiting for regulatory approval to sell its burgers in Europe and China because they contain genetically modified ingredients. But Impossible's chicken doesn't contain those same ingredients. Both companies plan to sell their chicken overseas.

Impossible is confident that consumers will gravitate to its nuggets. In company taste tests, it found that most consumers preferred its product to actual chicken.

“It’s better for you, its better for the environment and it tastes better than the animal,” said Impossible Foods President Dennis Woodside. “So we think that’s a pretty strong value proposition.”

Sara Young, the general manager of plant-based proteins at Kellogg Co., which owns Morningstar, said the brand has the biggest product portfolio and the highest repeat-buyer rate in the plant-based category.

“We’ve been at this for a long time,” she said.