They're available now through major foodservice distributors and will begin stocking at leading retailers later in September. 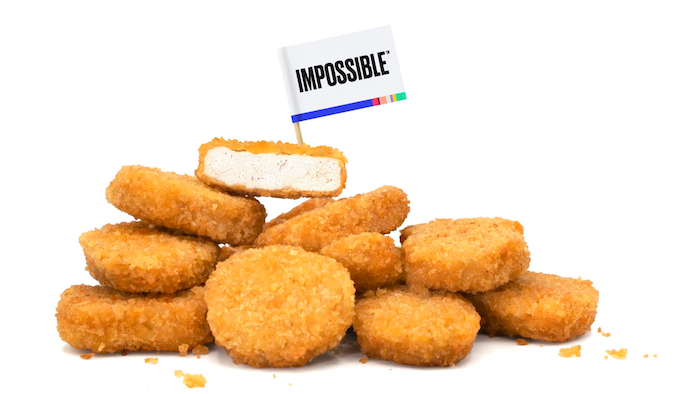 REDWOOD CITY, CA — On Sept. 7, Impossible Foods announced the launch of its newest product – Impossible Chicken Nuggets Made From Plants – marking a major milestone in consumers’ preference for plant-based products.

In a blind taste test of Impossible Chicken Nuggets for restaurants, seven out of 10 consumers preferred the Impossible Chicken Nuggets to animal-based chicken nuggets from a leading brand, and the product scored higher in liking in every category, including flavor, texture, and overall appearance. The test was conducted in Irving, Texas, among 201 meat-eating consumers, many of whom also regularly eat plant-based products.

“We are tremendously excited about our Impossible Nuggets. But this launch isn’t really about nuggets. It’s about the historic inflection point we’ve reached. For the first time, consumers unquestionably prefer meat made from plants instead of meat from an iconic animal,” said Pat Brown, founder and CEO of Impossible Foods. “In the battle for the future of food, this is the first time David has categorically bested Goliath, but it won’t be the last.”

Impossible Chicken Nuggets feature a golden, crispy breadcrumb coating, a juicy and springy white meat texture and a savory chicken flavor while containing 40% less saturated fat (2 grams vs. 3.5 grams per serving) and 25% less sodium (400 milligrams vs. 540 milligrams per serving) than animal chicken nuggets. Complete nutrition and ingredient information can be found here(opens in a new tab).

Based on a preliminary Life Cycle Assessment of the product, Impossible Chicken Nuggets use 48-49% less land, 43-44% less water and generate 36% less GHG emissions than the animal version.

Leading retailers including Walmart, Albertsons, Kroger, Gelsons, Safeway, ShopRite and Giant stores will begin stocking Impossible Chicken Nuggets Made From Plants in the frozen food aisle later this month. Priced at $7.99 (MSRP) for approximately 20 pieces (13.5 ounces), the nuggets come in a convenient resealable freezer bag and are fully cooked and ready to reheat via oven, microwave, or air fryer.