In Thailand, kratom leaves typically would be chewed to give the user a mild energy boost. 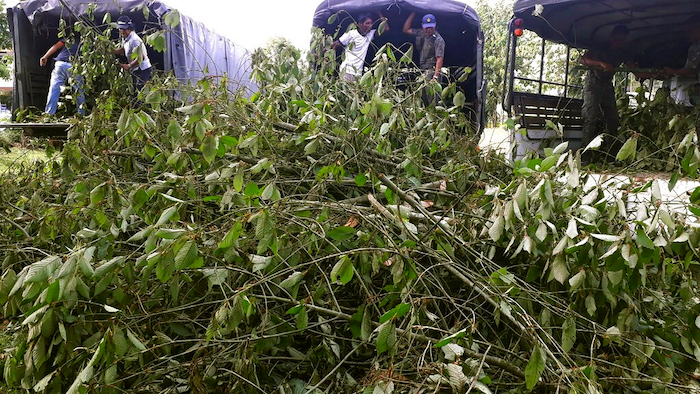 In this July 30, 2019, photo, officers gather illegally-grown kratom plants in Phang Nha province, Thailand. Thailand on Tuesday, Aug. 24, 2021, decriminalized the possession and sale of kratom, a plant native to Southeast Asia whose leaves are used as a mild stimulant and which has a following in the United States for its pain-relieving qualities.
AP Photo

BANGKOK (AP) — Thailand on Tuesday decriminalized the possession and sale of kratom, a plant native to Southeast Asia whose leaves are used as a mild stimulant and painkiller and which has a following in the United States for its pain-relieving qualities.

Justice Minister Somsak Thepsuthin said thousands of legal cases for the possession or sale of kratom were being dropped, and 121 inmates convicted in such cases would be released immediately. Possession of kratom had been punishable by up to two years in prison and a fine of as much as 200,000 baht ($6,077) for quantities of 10 kilograms (22 pounds) or more.

The decriminalization of kratom, which involved removing the drug from the official list of controlled narcotics, is the country’s latest move to liberalize its drug laws. In the past two years, Thailand has allowed regulated medical marijuana use as well as the licensed buying and growing of marijuana, and permitted households to grow up to six plants. Harsh penalties remain for hard drugs such as heroin and methamphetamine.

Easing pressure on Thailand’s justice system and its overcrowded prisons has been a major impetus for the new drug policy.

When he proposed the action on kratom to the Cabinet last year, Somsak said the move would not only help reduce costs in the legal system, but also allow the drug to be used as a low-cost substitute for expensive painkillers such as morphine and create income for people cultivating the plant, which is mostly grown and used in the impoverished south.

In Thailand, kratom leaves typically would be chewed to give the user a mild energy boost, although it can also be smoked. But it's sometimes mixed with other drugs to make a narcotic tea, or cocktail, a form in which it remains illegal.

The DEA says people have used kratom to relieve muscle strains and as a substitute for opium; the drug also has been used to manage withdrawal symptoms from opioids.

Nimu Makaje, a Muslim community leader in Thailand's southern province of Yala, expressed concern about abuse of the plant.

“If we are legalizing it, we need to have proper controlling measures,” he told The Associated Press. “Currently, a lot of people have lost their jobs and they may use it to reduce their stress. This is very dangerous."

Ramdin Areeabdulsorma, a local politician in nearby Pattani province, said kratom has been part of local people’s daily life since a long ago, helping them feel refreshed.

“To decriminalize kratom is the right thing to do. Local people or patients who need it will be able to access it more easily. However, I am concerned that teenagers will use it in a wrong way, for example, mixing kratom with other narcotics. We have to control this strictly, otherwise, it can cause damage,” he said.

In the U.S., kratom is generally unregulated, although it is illegal in several states. It's typically found in smoke shops that also sell vaping devices and CBD products, but there is also an industry lobby which promotes its use as a legitimate painkiller that's a safe alternative to powerful opioids.