The group wants the burger chain to commit to becoming fully plant-based by 2025. 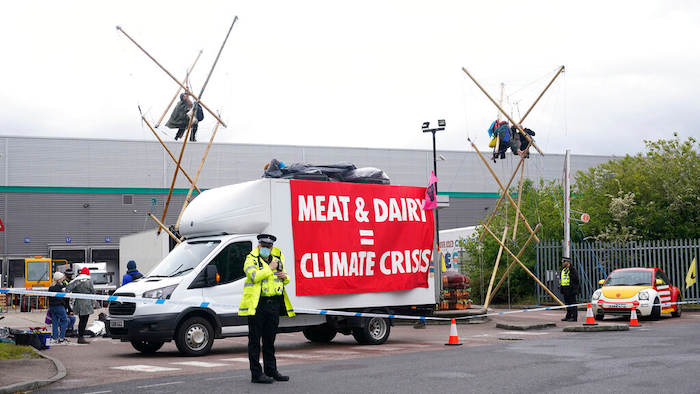 Animal Rebellion protesters suspended from a bamboo structure and on top of a van, being monitored by police officers outside a McDonald's distribution site in Hemel Hempstead, England on May 22.
Yui Mok/PA via AP

LONDON (AP) — Animal rights protesters are blockading four McDonald's distribution centers in the U.K. in an attempt to get the burger chain to commit to becoming fully plant-based by 2025.

Animal Rebellion said Saturday that trucks and bamboo structures are being used at the distribution sites in Hemel Hempstead, Basingstoke, Coventry and Heywood, Greater Manchester, to stop trucks from leaving the depots.

The group said it intends to remain at the sites for at least 24 hours, causing “significant disruption” to the McDonald’s supply chain, adding that the move will affect some 1,300 restaurants.

“The meat and dairy industry is destroying our planet: causing huge amounts of rainforest deforestation, emitting immense quantities of greenhouse gases and killing billions of animals each year," said James Ozden, a spokesman for the group.

“The only sustainable and realistic way to feed 10 billion people is with a plant-based food system. Organic, free-range and ‘sustainable’ animal-based options simply aren’t good enough,” he added.

A McDonald’s spokesperson said the company was assessing the impact of "the disruption" on its restaurants.

“We apologize to our customers for any disappointment caused,” the spokesperson said.