McDonald's Roared Back in Q1 as Restrictions Ease

McDonald's revenue jumped 9% to $5.1 billion for the January-March period, better than most had expected. 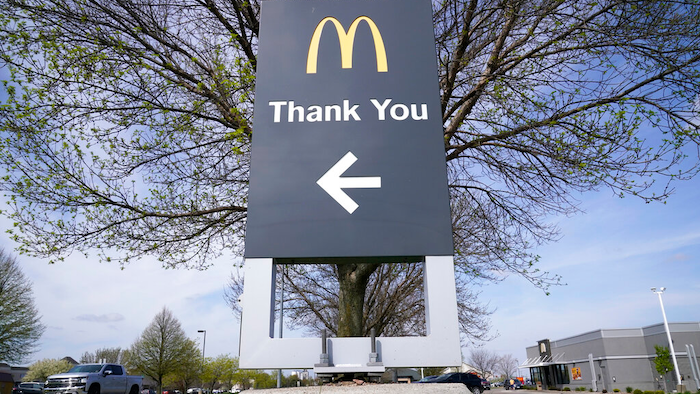 A thank you sign sits in front of a McDonald's restaurant on April 27 in Waukee, Iowa.
AP Photo/Charlie Neibergall

The bounce back for McDonald's as restrictions were lifted across the U.S. was so strong in the first quarter that the company surpassed sales during the same period even in 2019, long before the pandemic broadsided the country.

McDonald's revenue jumped 9% to $5.1 billion for the January-March period, better than most had expected.

Last year at this time stores were closing globally as the world sheltered from spiking COVID-19 infections, so an improvement in sales during the same stretch this year was expected. How easily it topped 2019's first-quarter sales of $4.95 billion, however, was not.

U.S. same-store sales, or sales at locations open at least a year, rose 13.6% in the January-March period. Fewer diners visited, and many dining rooms remain closed. But those who did visit ordered more, with many picking up food for the entire family rather than for one person.

“The positivity we saw in the first quarter was way beyond just the stimulus checks,” Erlinger said during a conference call Thursday with investors.

Drive-thru windows __ available in nearly all U.S. stores __ remain a competitive advantage. McDonald's said around 90% of its U.S. sales came through drive-thru windows in the first quarter, up from around 70% before the pandemic. The company has made multiple changes to speed drive-thru times, including a more simple menu.

Demand for delivery has spiked for McDonald's as well and is now available at 75% of its stores worldwide. Delivery orders tend to be larger than in-store orders.

The trick for McDonald's will be to keep that sales momentum going even as more U.S. dining rooms reopen and customers return to pre-pandemic habits.

CEO Chris Kempczinksi said the company's experience in Australia and Japan indicates that even as dining rooms reopen, demand for drive-thru and delivery will remain elevated.

A new loyalty program __ currently being tested in the U.S. and Germany __ and celebrity meal deals could also boost sales as the year progresses, he said. McDonald's plans to launch a meal collaboration with the South Korean pop group BTS in 50 countries on May 26.

McDonald's expects its U.S. same-store sales to continue to outpace 2019 levels in the second quarter.

About half of Europe's dining rooms remain closed, and drive-thru is less prevalent in that market. Sales are also suffering in tourist-dependent markets like Italy and Spain, Kempczinski said. He said McDonald's is hopeful that vaccine passports might help reopen travel in Europe this summer.

Net income rose 39% to $1.5 billion. Adjusted for one-time items, the company earned $1.92 per share, easily beating Wall Street's forecast of $1.81, according to analysts polled by FactSet.

Other major fast food chains are seeing a similar rebound as most of the world emerges from the pandemic. Revenue at Yum Brands __ which owns Pizza Hut, Taco Bell and KFC __ jumped 18% in the first quarter. The company reported this week that same-store sales rose 9%, with an especially strong performance in the U.S.

Like McDonald's, sales at Yum restaurants outpaced sales two years ago before COVID-19 shook the world.

Starbucks also reported better-than-expected results for the quarter this week, with sales up 11%.