Amid Uncertainty, French Wine Industry Puts Itself on Show

Thousands of winemakers are wooing some 30,000 French and international visitors at the Vinexpo fair through Wednesday. 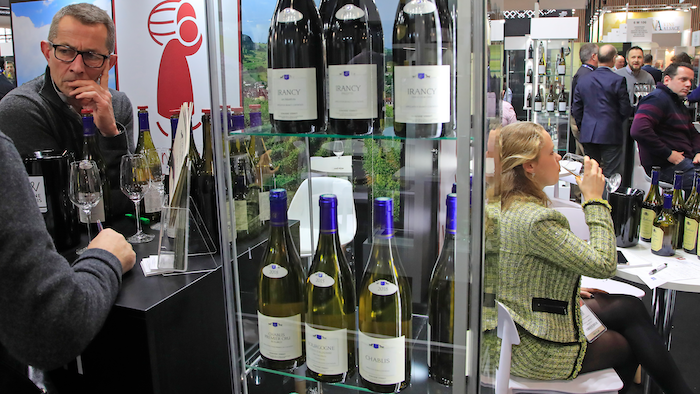 Wine fair goers taste wines of the Burgundy region in Paris on Monday, Feb. 10. Two thousand winemakers - including giant Moet-Hennessy - are wooing some 30,000 French and international visitors at the Vinexpo fair through Wednesday with a renewed focus on ecology and sustainability as well as tech innovation like robots.
AP Photo/Michel Euler

PARIS (AP) — France's big wine industry, shaken by US President Trump’s painful tariff hikes and the threat of climate change, is hoping to re-energize global interest in its products with a big trade fair in Paris.

Two thousand winemakers — including giant Moet-Hennessy — are wooing some 30,000 French and international visitors at the Vinexpo fair through Wednesday with a renewed focus on ecology and sustainability as well as tech innovation like robots.

They hope that shining a light on the industry’s advances, especially in environmental practices, will attract other countries to French wine and make up for the slump in exports to the U.S., where Trump imposed 25% in tariffs on a range of European products.

"Faced with the difficulties we're encountering with Trump's taxes, Brexit and the slowdown in China, we must find new markets in third countries by focusing on French excellence," said Agriculture Minister Didier Guillaume.

France is with Italy the biggest producer of wine in the world and has a number of prestigious brands that have helped define the industry - from Champagne makers to producers in the Burgundy and Bordeaux regions.

But it is facing a number of challenges, from tariffs to changing consumer habits and global warming. French sales to the U.S. halved after the tariffs came into effect in October.

The three-day fair is an impressive show, with Moet-Hennessy hosting industry movers and shakers to talk about ecology initiatives. It also unveiled new details on plans to create a 20 million-euro sustainability research center in Champagne, and its commitment to stop all forms of herbicides by the end of this year.

Moet-Hennessy CEO Philippe Schaus struck an upbeat tone despite the U.S. tariffs, which were imposed as part of a broader trade spat between the U.S. and EU over the aerospace industry.

“We hate to be the collateral damage of other topics which do not concern the wine and spirits industry. We believe that tariffs are completely unproductive... It’s damaging to business -- both for us and for distributors in the states,” Schaus told the AP.

Among the innovations was a futuristic electric tractor that its makers say reduces the carbon footprint by 23 tons a year when compared with a regular tractor.

Guests also gawped at a massive robot called Ted, which is designed to travel up and down vineyards picking out undesired weeds or rotting leaves and to replace the use of herbicides that hurt biodiversity.

“We already have 20 robots in the field with different partners... and we’re running trials in California next year,” said Thibaut Delcroix, the product manager for Ted at Naio Technologies.