Petco, Others Respond to Demand for Natural Pet Foods

Petco announced Tuesday it will stop selling dog and cat food and treats with artificial colors, flavors and preservatives, both online and at its nearly 1,500 stores in the U.S. and Puerto Rico. 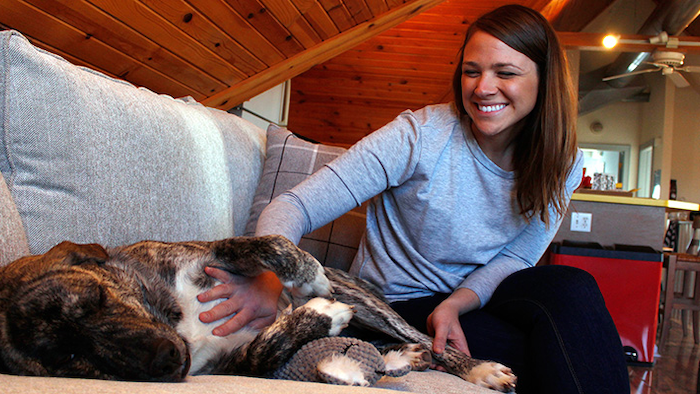 In this Saturday, Nov. 10, 2018, photo Lauren Ray pets her 9-month-old dog Bear in her Milwaukee home. Ray says she is happy to hear Petco is announcing Tuesday, Nov. 13, that it plans to stop selling dog and cat food and treats with artificial colors, flavors and preservatives, both online and at its 1,500 stores in the U.S. and Puerto Rico by May 2019. She feeds her dog organic food and hopes Petco's change will help her find more varieties at a convenient location. (AP Photo/Carrie Antlfinger)

Demand for healthy, natural food is extending from humans to their pets.

Petco announced Tuesday it will stop selling dog and cat food and treats with artificial colors, flavors and preservatives, both online and at its nearly 1,500 stores in the U.S. and Puerto Rico.

"We are making sure we are always taking the nutritional high ground," Petco CEO Ron Coughlin told The Associated Press.

Petco's move, the first of its kind among major pet stores, comes at a time when sales of natural pet foods are steadily rising.

Natural pet products still account for a small portion of the U.S. market share but growth has more than doubled to 6.5 percent between 2013 and 2017, according to Nielsen, a data company. Nielsen said sales of pet food free of genetically modified ingredients jumped 29 percent last year. Sales of pet food without artificial preservatives and colors grew 4 percent.

Americans spent $69.5 billion on their pets last year, up 4 percent from the year before, according to the American Pet Products Association.

As human tastes have grown more sophisticated, so have their demands for their pets, Owen said.

For dogs, there are bags of organic, vegetarian and grain-free food. Some brands claim to mimic ancestral diets, with kibbles made from venison or wild boar. Cans of cat food feature tilapia, rabbit and pumpkin.

Ashley Murphy, a 33-year-old project manager in Atlanta, has been watching the amount of sugar and preservatives in her own food. That made her question the ingredients in the food she feeds her dog Maddie, a Jack Russell mix.

"Minus some of the minerals and some of the fermentation products at the very bottom of the list, I can pronounce every single ingredient in her new food," said Murphy, who said she doesn't mind spending more for the food.

Owen says young people like Murphy are driving the trend in natural pet food. He expects it will keep growing and lead to even more "natural" innovations, like freeze-dried raw food.

Coughlin said food with those ingredients will start coming off the shelves in January. Some suppliers are reformulating their food; others simply won't sell through Petco anymore, he said. Food with artificial ingredients that isn't sold by May will be donated to animal shelters.

Eventually the store plans to expand its ban on artificial ingredients to foods it sells for other animals, he said.

Dr. Whitney Miller, Petco's top veterinarian, said there is limited research into the impact of artificial ingredients on dogs and cats. And Dr. Hollie Rebo, a veterinarian based in Dearborn, Michigan, said consumers shouldn't be overly concerned since pet food makers already limit those ingredients because they add costs.

When they do add things like artificial colors, it's because it makes the food more palatable to humans.

"I love the idea of getting rid of a lot of useless junk, but it's really there to sell more product," she said.