How Much Sugar In That Cola? Panera To List It On Its Cups

The move is the latest by the company to appeal to Americans who are increasingly concerned about what's in their food and drinks. 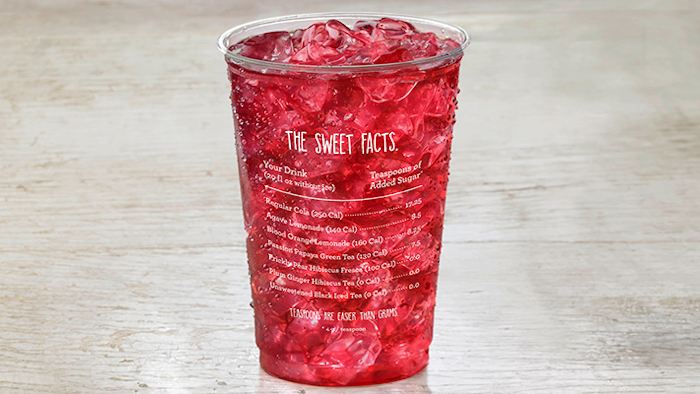 This photo provided by Panera Bread shows a 20-ounce fountain drink in a cup that lists the amount of added sugar and calories in seven of the restaurant's drinks, including cola and teas. Panera said the new cups will be available in eight cities the week of Aug. 21, 2017, including New York, Chicago and St. Louis. They will be in all the chain's more than 2,000 locations by the middle of September. (Courtesy of Panera Bread via AP)

NEW YORK (AP) — Panera Bread will start listing the amount of added sugar and calories on the cups for seven drinks, including cola and iced teas.

The move is the latest by the company to appeal to Americans who are increasingly concerned about what's in their food and drinks. Panera and other restaurant chains have been tweaking their recipes and removing artificial ingredients to match consumer's changing tastes.

Panera said the new cups will be available in eight cities this week, including New York, Chicago and St. Louis. They will be in all the chain's more than 2,000 locations by the middle of September.

CEO Ron Shaich said the cups list the amount of added sugar in teaspoons instead of grams because it's less confusing. "I think the only people who really understand grams are drug dealers and Walter White," Shaich said in an interview, referring to the drug-dealing character from the TV show "Breaking Bad."

Panera had begun listing sugar counts near its soda fountains in March when it launched its new iced teas, lemonades and other fruity beverages. Since then, 8 percent of its fountain soda-drinking customers have switched to iced teas and other non-bubbly drinks, the company said.

Shaich said PepsiCo, which provides the soda that's sold at Panera, was told about the new cups, but he declined to describe the discussions. PepsiCo said in a statement that it offers several drinks with no sugar added and no calories, and that the company and Panera "are both on a journey to offer consumers healthier beverage options."