Beer consumption has been tanking for five years straight in Japan, as the younger generation shies away from the obligatory after-work drinking that was a trademark of the dark-suited heroes of Japan Inc. 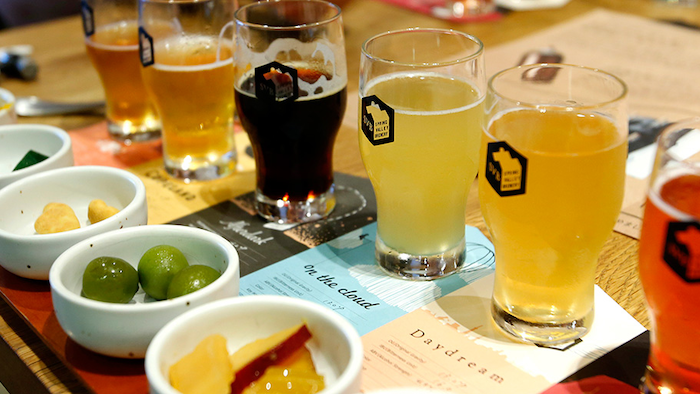 TOKYO (AP) — From beer gardens on the rooftops of department stores to fireworks extravaganzas to quiet, wood-paneled craft breweries, Japanese seem to quaff an awful lot of beer in the summer.

But beer consumption has been tanking for five years straight in Japan, as the younger generation shies away from the obligatory after-work drinking that was a trademark of the dark-suited heroes of Japan Inc.

Japan's annual per capita beer consumption fell about 7 percent between 2010 to 2015, according to a study by major beer maker Kirin.

The future outlook is for more of the same. It's such an obvious trend that there's a Japanese phrase to describe it, "beerooh banareh," or "leaving beer," a gradual decline that hit after beer drinking peaked in about the mid-1990s.

Younger Japanese tend to be more independent-minded than their baby boom generation parents or their grandparents, who saw going out for beers with their office bosses and co-workers as a call of duty.

Brews also are losing out in Japan to a wide variety of other liquors, from wines to "kanchuhai" fruity cocktails, whiskies and cheaper beer-like drinks, and of course, sake.

Naturally, all this worries Haruhiko Matsuba, marketing manager for Asahi Breweries, the industry leader in Japan.

"The custom is getting lost," said Matsuba, who says he enjoys a beer or two a day. "Beer can offer joy, happiness and smiles, and so everyone should try beer again."

Asahi, founded in the late 1800's, is an institution in Tokyo, where its huge golden suds sign shines on the banks of the Sumida River. The annual Sumida River summer fireworks it sponsors each July work like one big huge ad for its beer — this year the city's governor, Yuriko Koike, donned a summer kimono for televised "kanpais" —traditional toasts — by the river.

In its effort to grab attention and help reverse the decline in beer consumption, especially among the younger generation, the iconic Japanese brand has turned to Hollywood. It tapped actor Johnny Depp to help sell a limited-edition version of its 30-year-old hit Super Dry — the brew that helped catapult it to No. 1 in the Japanese beer industry in 1998. The company's latest ad campaign features Depp riffing on an electric guitar on a rooftop before popping a cold one.

"He is an extraordinary character," Matsuba told The Associated Press. "It's about the unexpected factor of Hollywood."

To expand its already formidable global reach, Asahi has signed agreements with overseas beer brands, such as Italy's Peroni, the Dutch Grolsch and Pilsner Urquell of Czechoslovakia.

Other Japanese breweries also are expanding. Asahi's rival, Sapporo Holdings, which has been the No. 1 Japanese beer maker in the U.S. for three decades, announced this month it was acquiring Anchor Brewing Company.

It likely would take way more than a cameo by Depp, though, to reverse the trend away from beer.

Data compiled by Kirin Brewery Co., a rival Japanese brewery, found the annual global consumption of beer, at nearly 184 million kiloliters, fell in 2015 from the year before, for the first time in 30 years, as consumption in China peaked.

By region, Asia still tops the world in beer consumption, making up 34 percent of global beer guzzling, followed by Europe at 27 percent. North America accounts for 14 percent and Africa just 7 percent, according to the Kirin study.

By nationality, Czechs were No. 1 in per capita consumption of beer. Americans ranked No. 20, while Japanese were 55th, down from 38th in 2010.

"The days of the daily 'kanpai' and chugging beer are over," says Kirin spokeswoman Naomi Sasaki.

At least, though, Japanese are starting to appreciate more nuanced craft beers, she says, reflecting their more individual-oriented lifestyles.

Fujiwara believes changing tastes in part reflect a change of perspective after the tsunami and nuclear disaster in northeastern Japan in 2011. These days, many Japanese are less concerned about keeping up with their neighbors, he said.

"The biggest contrast to that kind of thinking is the bubble era when people simply wanted what was considered cool by society, be it their home or their car," he said, referring to the go-go economy of the late 1980s, which collapsed in the early 1990s.

Last year, Kirin signed a deal with Brooklyn Breweries, founded by former AP war correspondent Steve Hindy, to replicate its flavors at its plants in Japan.

Kirin's brewery has a western menu, spacious terrace and beers with names like DayDream and Jazzberry that are brewed behind transparent walls.

Shizuka Nagasawa, 29, was enjoying a recent weekday afternoon off at Spring Valley Brewery with her husband Keita Nagasawa and their 3-year-old son. They're such fans they joined the brewery's club and have craft beer delivered to their home each month.

"There is such a wide range, like bitter-tasting ones and fruity flavors. Checking them out is fun," said the clerical worker at a tea-maker.

Later that day, in Nihonbashi, an older part of downtown Tokyo, about a dozen "salarymen," jackets and ties off, each armed with a glass of cold beer, were downing their after-work beers the old-fashioned way.

At Mitsukoshi department store's rooftop beer garden, it was all-you-can-eat-and-drink for three hours at 4,801 yen ($44) for men and 4,301 yen ($40) for women. The food: classics like fried noodles, curry and wieners. The star beer: Asahi Super Dry.

Eiji Itou, 50, a technology company employee who was sitting beside his company's president, shrugged at the notion that drinking with co-workers in a beer garden is no longer trendy.

"Kanpai," the group shouted in unison, raising their beers together and gulping them down.

"We, the old guys, are upholding tradition," he said with a smile.