The $675 million plant-based creamer plant will be in Glendale.

Nestle, which makes the Coffee mate brand of creamers, said the factory will eventually employ more than 350 people in Glendale. It's slated to open in 2024.

The planned facility comes amid a rapid rise in plant-based foods and beverages. Oat milk in particular has been winning consumers — and famous investors like Oprah Winfrey — with the message that it’s healthier and more environmentally sustainable than cow’s milk.

Nestle USA, a division of the Swiss firm Nestle S.A., is based in Arlington, Virginia and said it has spent nearly $3 billion since 2020 to expand its existing factories and build new ones. The Glendale plant will join its 14 food and beverage production facilities in the United States.

The project is eligible for up to $7 million in state tax subsidies if Nestle follows through on the commitment for 350 jobs, according to the Arizona Commerce Authority.

Nestle USA CEO Steve Presley said in a statement that the company is focused on its high-growth products including coffee, frozen meals, beverages and pet care. 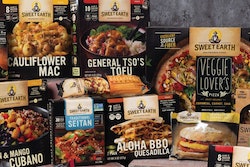