BOSTON — Motif FoodWorks, the food technology company on a mission to make plant-based food better tasting and more nutritious, announced Wednesday that it has raised $226 million in Series B funding.

This second-round of funding will help Motif accelerate its advancement of the plant-based category. The company plans to increase research and development capabilities; scale and commercialize its food technologies; and expand its people and facilities footprint. Continued growth in these areas is crucial to Motif's work to solve key sensory and nutritional challenges with existing plant-based foods, including meat and dairy alternatives.

Motif's new food science and design approach—along with food technologies developed through precision fermentation and material science breakthroughs—comes as consumers are increasingly seeking alternatives to animal-based protein. The plant-based food market grew 27 percent to $7B in 2020, nearly double the growth rate of overall U.S. retail food sales during the same period. But even with that growth, existing plant-based alternatives have critical experience gaps, especially in taste and texture. In fact, two out of three Americans (67 percent) say they would be willing to eat more plant-based foods instead of meat if plant-based foods tasted better than they do today.

"Plant-based foods have the potential to unlock enormous benefits for people and the planet, but that will only happen if they live up to, or even exceed, what consumers expect from animal-based counterparts," said Jonathan McIntyre, CEO of Motif FoodWorks. "With support from our investors, we're advancing the understanding of food science and design to make plant-based foods better tasting, more nutritious and so desirable that people actually crave them."

Originally spun out of Ginkgo Bioworks in 2019, Motif has raised a total of $345 million to date. The company recently opened a new state-of-the-art 10,600 sq. ft. office and lab space in Boston's Seaport neighborhood. Additionally, it has secured licensing partnerships with the University of Guelph and Coasun Inc. for technologies that create melting and stretching characteristics in plant-based cheeses, and healthier fat alternatives that marbleize plant-based meats. 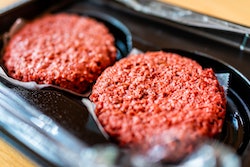