It’s the latest milestone in the rapid rise of oat milk. 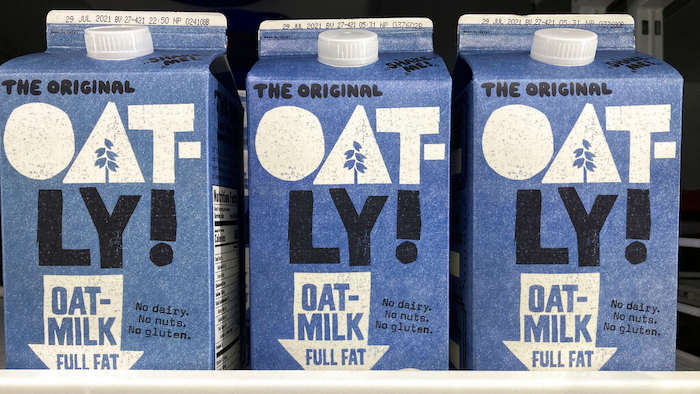 Oatly containers are displayed at a grocery store on May 18 in North Miami, Fla.
AP Photo/Marta Lavandier

Oatly, the world’s largest oat milk company, raised $1.4 billion in an initial public offering Thursday on the Nasdaq stock exchange, capitalizing on a global surge in demand for its products.

Oatly priced its shares at $17 apiece ahead of the IPO, giving the company a valuation of nearly $10 billion. It's trading under the ticker symbol “OTLY.”

It’s the latest milestone in the rapid rise of oat milk, which is winning consumers — and famous investors like Oprah Winfrey — with the message that it’s healthier and more environmentally sustainable than cow’s milk. Once a niche product designed for people who were lactose intolerant, Oatly oat milk is now on the menu at Starbucks, in the grocery aisle at Target and sold online by Alibaba in China.

And Oatly, which is based in Malmo, Sweden, thinks oat milk has a lot more growth ahead. Global sales of plant-based dairy substitutes reached $18 billion in 2020, or just 3% of the $600 billion dairy industry, according to Euromonitor.

Like the flexitarians who have fueled the rise of plant-based meat alternatives __ and the successful 2019 IPO of Beyond Meat __ Oatly says more and more consumers are giving its oat-based drinks, yogurt and ice cream a try. In the last three months, between 35% to 40% of adults in the U.S., the United Kingdom, Germany, China and Sweden purchased plant-based milk alternatives, Oatly said. 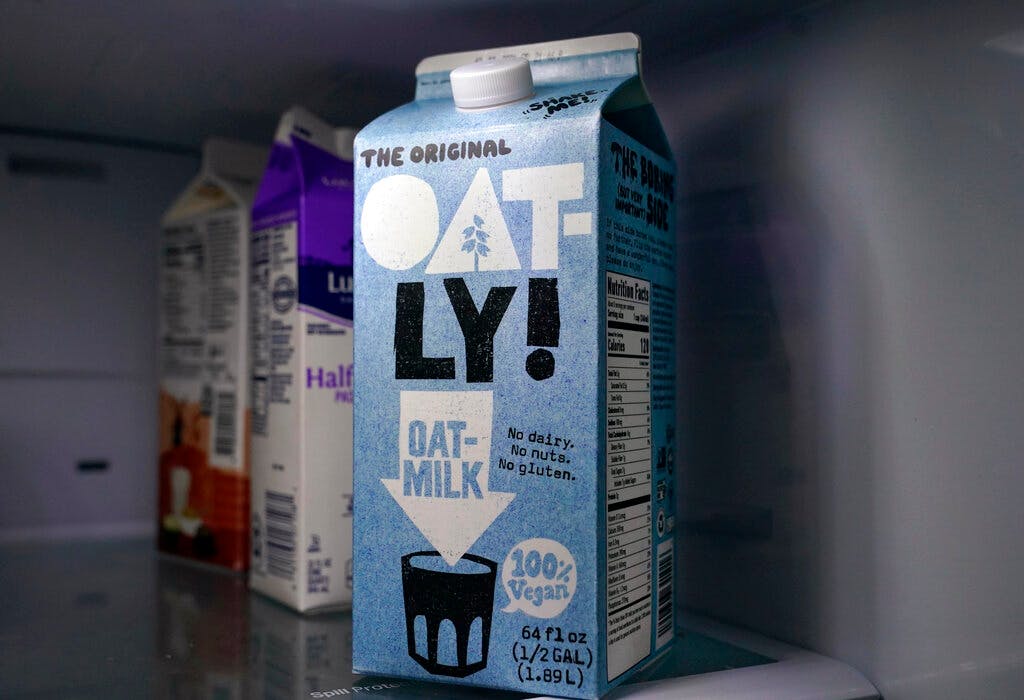 A carton of Oatly oat milk sits in a home refrigerator on May 18 in Bellingham, Wash.AP Photo/Elaine Thompson

Overall U.S. sales for dairy alternatives grew 15% to nearly $2.2 billion in the 52 weeks ending May 1, according to Nielsen. Almond milk held the largest share of those sales, at 68%. Oat milk was second with a 14% share and soy milk held an 8% share. Coconut milk and rice milk each had less than a 4% share.

Companies are also experimenting with other varieties. Nestle recently launched a milk made from peas, while startups in Israel and Singapore are making cow's milk from cells.

“We're been scanning the world for crops for 30 years and there’s nothing more premium out there. We know that oat delivers,” Petersson said.

Cara Rasch, an analyst with the market research company Packaged Facts, said oat milk’s mild and pleasant flavor __ which blends well with coffee __ is one reason for its success.

Rasch said many consumers also see it as a healthier alternative to dairy milk. One cup of Oatly whole milk has fewer calories, less fat, lower sodium and lower cholesterol than a comparable serving of whole cow’s milk. But cow’s milk has higher protein, lower carbohydrates and more naturally occurring vitamins and minerals.

Oat milk takes less land and energy to produce than dairy milk, and emits fewer greenhouse gases. But it also beats other plant-based milk alternatives in its environmental impact, according to a 2018 Oxford University study. Rice farming leads to more fertilizer runoff than oat milk, for example, and almond milk requires more water because almond trees are primarily grown in drought-prone California.

Oatly’s roots date to 1995, when a group of scientists at Lund University developed the world’s first oat milk. The group began selling its milk under the Oatly name in 2001 and gradually added other products, like ice cream and yogurt.

The company grew slowly until 2012, when it appointed a new management team led by Petersson, an outsider who had led several startups. Oatly entered the U.S. market in 2017 and China in 2018.

In 2020, Oatly’s revenue more than doubled to $421.4 million. Petersson said Oatly took a hit from the closure of coffee shops due to the coronavirus, but surging grocery and e-commerce sales more than made up for that.

Oatly's full year net loss widened to $60.4 million __ from $35.6 million in 2019 __ as it spent heavily on marketing and increasing production. Oatly currently has four manufacturing plants worldwide, with three more planned or under construction. Petersson said the IPO proceeds will be used to expand production capacity.

A total of 84.4 million Oatly shares were offered in Thursday's IPO. Oatly offered just over 64 million shares, while some of the company's shareholders offered the rest.

Last July, Oatly sold a 10% stake in the company for $200 million to a group of investors led by Blackstone Group. Among those investors are Winfrey, actress Natalie Portman, former Starbucks CEO Howard Schultz and Roc Nation, Jay-Z's entertainment company.

Oatly Expanding Capacity at its Utah Factory Amid High Demand