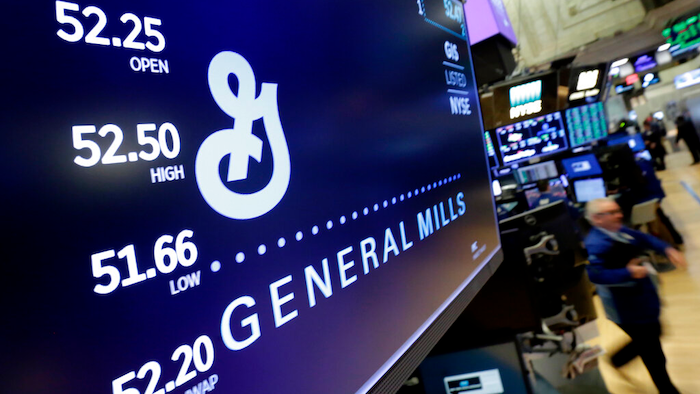 n this Feb. 23, 2018 file photo, the logo for General Mills appears above a trading post on the floor of the New York Stock Exchange.
AP Photo/Richard Drew, File

Then the pandemic hit, fueling the biggest surge of pet adoptions in recent memory.

About 12.6 million U.S. households got a new pet last year after the pandemic was declared in March 2020, according to a COVID-19 Pulse Study by the American Pet Products Association.

When General Mills released quarterly earnings this spring, it became clear that the animals taken home from shelters during the pandemic were not the only winners.

Third-quarter net sales from General Mills' pet business, which ended in February, jumped 14 percent to $436 million, and through nine months of the fiscal year, sales are up 13 percent to $1.29 billion.

That is the period that ran the gamut of the global pandemic.

Three years ago when General Mills said it would buy Blue Buffalo for $8 billion, a number of industry analysts had sticker shock.

But Blue Buffalo has driven growth with double-digit sales in both dog and cat foods and the company has registered overall sales growth in 12 of the past 14 quarters.

The acquisition of Blue Buffalo was part of the company's campaign to revive sales that declined in 15 of 16 quarters between 2013 to 2017. The 150-year old food giant has modernized its portfolio of brands as Americans shift away from processed foods. It's been acquiring organic and natural foods brands for humans as well.

General Mills did sell pet food back in the 1950s and from all appearances, it's back in the business to stay.

“Pet food is a high-growth category, fueled by the humanization of pets, a trend that has only increased during the pandemic,” said Bethany Quam, the head of General Mills' pet division.

The acquisition of Tyson's pet treat business is expected to close in the first quarter of fiscal 2022, with an estimated tax benefit of $225 million, bringing the effective purchase price to $975 million, General Mills said. The deal includes the Nudges, Top Chews and True Chews brands.