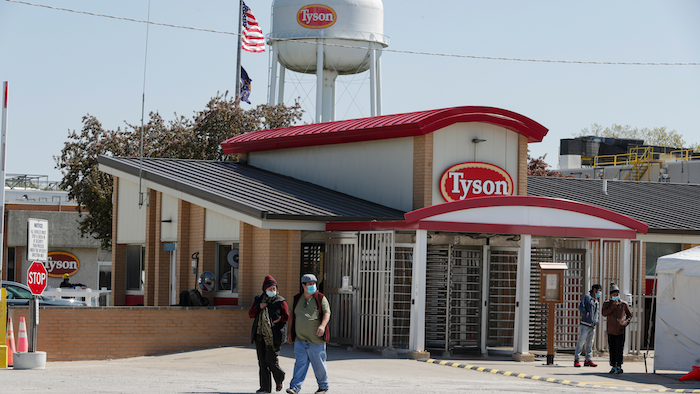 In this May 7 file photo, workers enter and leave the Tyson Foods pork processing plant in Logansport, IN.
AP Photo/Michael Conroy, File

NEW YORK — On Dec. 15, New York City Comptroller Scott M. Stringer called on the U.S. Securities and Exchange Commission (SEC) to open an investigation into Tyson Foods Inc. for making misleading disclosures to investors, including the New York City Retirement Systems, regarding its worker health and safety protections, and resulting risks, amid the COVID-19 pandemic. Tyson’s slow and minimal pandemic response and the resulting infections, hospitalizations, and deaths among its workforce are well-documented; however, Tyson’s annual disclosure paints an inaccurate and misleading picture of the company’s safety culture and its claims that it continues to implement safety measures recommended by the Centers for Disease Control and Prevention (CDC) and the Occupational Safety and Health Administration (OSHA).

“Tyson is flagrantly misrepresenting its poor pandemic response,” Comptroller Stringer said. “There is human cost to Tyson’s failures – preventable deaths, hospitalizations and sick workers. These failures have material impacts on its business operations that carry serious risks for shareholders. I am calling on the SEC to immediately open an investigation into Tyson’s misleading and dubious claims that they are adhering to OSHA and CDC safety guidelines, because shareowners need a full and transparent accounting into Tyson’s workplace safety and the risks to both workers and investors amid the COVID-19 pandemic.”

Tyson’s COVID-19 pandemic response was slow and insufficient as the virus spread through its facilities. Any steps that the company took to protect its workers were nominal and ultimately ineffective, including allowing workers to wear bandanas and sleep masks as ‘protective’ face coverings, which provide little to no defense against airborne COVID-19 transmission. Tyson’s severe downplaying of the severity of COVID-19 in its largest pork plant led to 1,000 workers becoming infected, as well as hospitalizations, deaths, and ultimately the plant’s closure. The company’s sick policy was similarly inadequate: pausing its policy of penalizing workers who call in sick only for a few months while incentivizing workers to continue working with $500 bonuses, then in June resuming penalizing workers who take sick leave.

As of Dec. 3, Tyson has the highest number of COVID-19 cases of any company in the meatpacking industry, and more than three times as many cases as the second-highest ranking company, JBS, the nation’s largest meatpacking company, according to the non-profit Food Environment Reporting Network.

Tyson’s health and safety record was already problematic even before the pandemic began. In 2017, Tyson had the fourth highest number of reported severe injuries out of 14,000 companies from 2015-2016, and was fined more than $700,000 for health and safety violations in 2016 alone. In 2019, Tyson was ranked fifth by Human Rights Watch for reported severe injuries out of tens of thousands of meat and poultry plants. A shareholder resolution urging greater transparency on Tyson’s human rights record was supported by 37% of the non-insider, Class A shares that were voted at the February 2020 annual meeting.

To read Comptroller Stringer’s letter to the Securities and Exchange Commission, click here.