Fishers say the port knew but did not stop homeless people from entering and setting camping and cooking fires within the building. 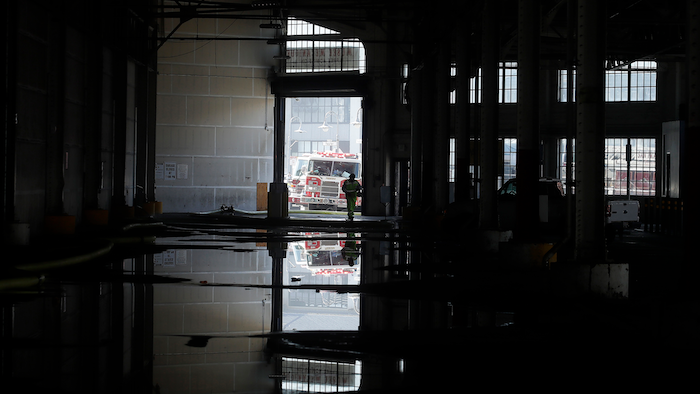 In this May 23, 2020 photo, a fire official is shown reflected in a puddle in a warehouse after a fire broke out before dawn on a pier at Fisherman's Wharf in San Francisco.
AP Photo/Jeff Chiu, File

SAN FRANCISCO (AP) — More than two dozen commercial fishers who make up the bulk of San Francisco's famed seafood industry sued the city Wednesday, alleging that gross negligence by the Port of San Francisco resulted in a fire that destroyed a massive warehouse where they stored their gear.

The pre-dawn blaze in May devastated an 85,000-square-foot warehouse at the end of Pier 45 in Fisherman's Wharf. Fishers, who lease space from the port to store their equipment, say the port knew but did not stop homeless people from entering and setting camping and cooking fires within the building, which contained flammable materials and lacked automatic sprinklers and fire extinguishers.

Many businesses were forced to acquire new gear for this month's Dungeness crab season while some remain shut out altogether, they say.

John Cote, spokesman for City Attorney Dennis Herrera, called the fire a heartbreaking tragedy, “but we also have a duty to San Francisco taxpayers, and the city was not responsible for that fire," he said in a statement

Pier 45 is a concrete pier with a mix of seafood and maritime businesses and tourist attractions, including the SS Jeremiah O’Brien, a historic World War II liberty ship. Nearby is the popular Pier 39.

John Mellor, a plaintiff and longtime crabber and fisher, said everyone lost “hundreds of thousands of dollars" worth of gear in the fire.

“Most fishermen don’t make a lot of extra money each year, so we don’t have a pot of savings that can be dipped into when something like this happens. It’s a desperate situation. The Port needs to make this right," he said.

Fishers also allege that the port failed to ensure that an adequate water supply was available, preventing the fire department from taking quick action to mitigate its spread.

Gross, the lawyer, said the fire department called the blaze accidental but did not determine a cause.