Nematodes with a taste for "insect innards" may offer cranberry growers a natural alternative to fighting hungry crop pests with chemical insecticides. 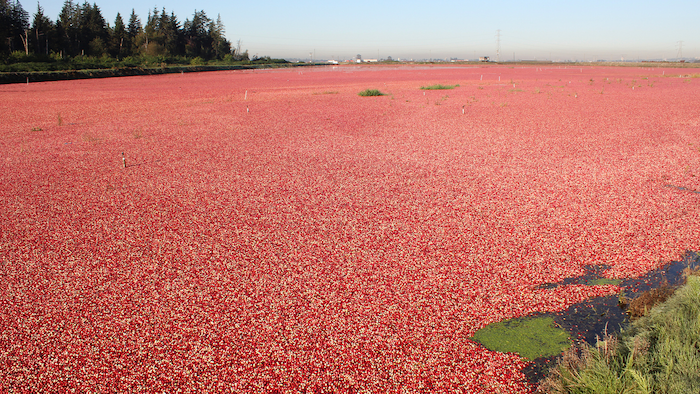 Nematodes with a taste for "insect innards" may offer cranberry growers a natural alternative to fighting hungry crop pests with chemical insecticides.

Scientists with the Agricultural Research Service (ARS) and University of Wisconsin (UW) are now exploring the possibility in field trials.

They've set their sights on redheaded flea beetles, Sparganothis fruitworms and other cranberry pests that attack the cranberry plant itself or its tart-tasting fruit. Severe infestations can force growers to apply insecticides, ratcheting up their production costs. Developing alternative controls as part of an integrated pest management approach can reduce or replace the need for insecticides, noted Shawn Steffan, an entomologist with the ARS Vegetable Crops Research Unit in Madison, Wisconsin.

For his part, he and UW collaborator Shane Foye are working to formulate a bio-insecticide that's made of entomopathogenic ("insect-killing") nematodes. One species they're particularly excited about came from the self-same environment that cranberries thrive in—the marshland and bogs of central Wisconsin. Cranberry also happens to be the official fruit of the state, which produces 60 percent of the nation's total crop.

Annually, Americans consume 2.3 pounds of cranberries per person, primarily as juice but also in dried fruit snacks and holiday fare such as cranberry relish. However, the path from bog to juice bottle (or table) can be a perilous one—no thanks to sundry insect pests whose appetites for destruction threaten the crop's yield, fruit quality or both. 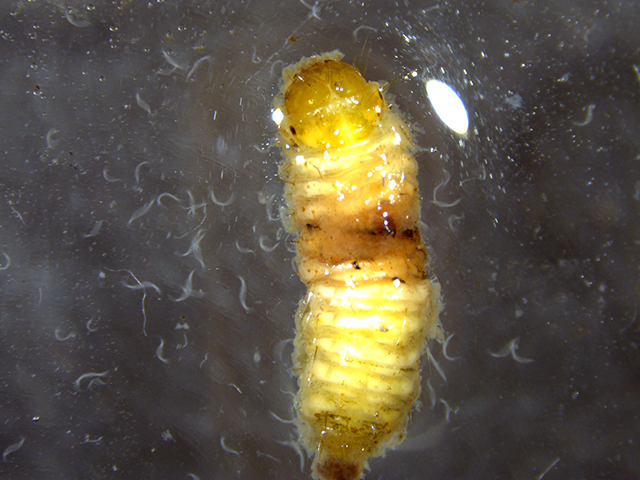 Nature, though, has seen fit to make these pests a favorite food of the nematodes Heterorhabditis georgiana and Oscheius onirici. Both species were found in the acidic, wet bogs of central Wisconsin. Interestingly, H. georgiana was originally discovered by David Shapiro-Ilan (another ARS scientist) in Georgia. "O. onirici was originally found within caves in Italy, but clearly there are populations making a living in the marshlands of Wisconsin," said Steffan.

The researchers hope both nematode species will prove to be an especially useful ally to both conventional and organic cranberry growers. Neither species is a threat to people, pets or other vertebrate animals. But what they do to their preferred prey isn't pretty. After entering a natural body cavity, the nematodes release symbiotic bacteria that liquefy their prey's internal organs and tissues. This creates a nutritious soup that the nematodes eat. Afterwards, they mate and deposit eggs inside their host's remains. Eventually, juvenile nematodes wriggle free in search of new hosts to infect, a cycle that lasts as long as their prey does.

In field trials, spraying a solution of the nematodes onto cranberry beds reduced flea beetle numbers by up 93 percent. Average levels of control typically reached 60 to 70 percent—equal to two insecticide applications, Steffan noted. In related laboratory experiments, O. onirici also proved lethal to the adult and larval stages of the spotted wing drosophila, an invasive species from Asia that’s become an established U.S. pest of many different fruit crops.

Encouraged by the results, the researchers have devised a method of rearing the nematodes by the billions and creating a clean, highly concentrated mass of them that can be mixed with water and sprayed onto cranberry plants

Additionally, "we are trying some side-by-side trials this year involving commercial nematodes," Steffan said. "This will give us some idea as to how our native Wisconsin nematodes compare to 'off-the-shelf' varieties."

A new study of 16 products whose label claims to contain wild mushrooms showed that nearly all consisted of cultivated species.
Aug 26th, 2021

The agency says it is revoking all tolerances for chlorpyrifos to particularly protect children and farmworkers.
Aug 20th, 2021

McDonald’s to Test McPlant Burger at 8 U.S. Restaurants in November