Based on new research that found whole nuts contain less calories than previously thought, KIND has adjusted their nutrition labels. 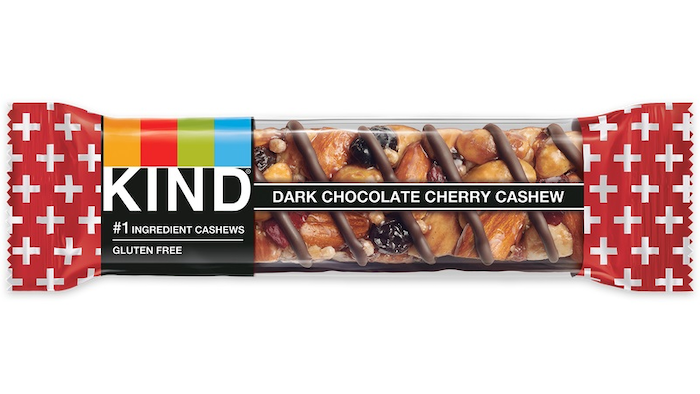 NEW YORK — On Tuesday, KIND Healthy Snacks announced it had adopted nutrition research led by the United States Department of Agriculture (USDA)'s Agricultural Research Service, furthering its commitment to transparency surrounding its products and their nutritionals. The research found that whole nuts, such as almonds and cashews, contribute 19 and 16 percent fewer calories, respectively, than previously thought due to the way in which our bodies digest the fat found in these nuts. Despite the calories decreasing, the nutrition profile of nuts, including those in KIND's products, remain the same.

KIND is the first national snack brand to announce a change to their labels based on this research. Given whole nuts are the leading ingredient in its nut bars, over 95 percent of KIND's nut bar portfolio was impacted. In contrast to KIND, all of the other top 10 bar competitors lead with a sugar source, such as brown rice syrup, or a protein blend, such as whey or soy isolate.

"KIND has always prioritized using and celebrating whole nuts as the main ingredient in our nutrition bar portfolio," says Daniel Lubetzky, Founder and Executive Chairman of KIND. "This research indicates that nuts not only contain fewer digestible calories but are just as nutrient dense as they always have been with the same amount of protein, and essential healthy fats that contribute to heart health."

Scientists are discovering that the standard way of measuring calories – the 100-year old Atwater system — is inaccurate when it comes to certain foods, like nuts. "Nuts remain a nutrient dense snack, but the number of calories provided in a single serving has been grossly miscalculated," says Dr. David Baer, one of the leading USDA researchers. "Our findings suggest a more accurate representation of calories and food companies using nuts in their products will be able to provide clearer information to the public."

The study is especially relevant as tree nut consumption has grown 88% between 2000-20171. Calories are the second most checked item on a nutrition facts label, following sugar, according to the NPD Group2. In fact, 61% of adults are trying to reduce their calorie intake.3

More than 95% of KIND's nut bar portfolio is affected, resulting in a 10-30 calorie reduction per bar. Most notably, its best-selling offering Dark Chocolate Nuts & Sea Salt, will shift from 200 to 180 calories. The updated nutritional information can be found on KIND's newly redesigned packaging.

Since its founding, KIND has been committed to providing people with the information they need to make informed food decisions. The adoption of this updated nutrition science is just one example of how it delivers on its promise to prioritize transparency. For the most current nutritional information, please refer to specific product packaging.