As of Wednesday, the world's largest burger chain says classics like the Big Mac and Quarter Pounder with Cheese are preservative-free, with reformulated buns and sauces. 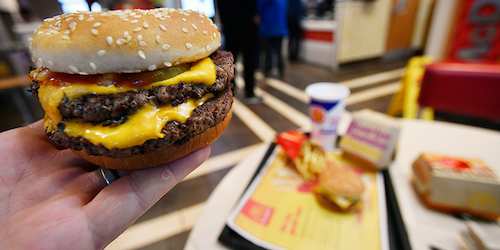 A McDonald's Double Quarter Pounder is shown with the new fresh beef Tuesday, March 6, 2018, in Atlanta. McDonald's is offering fresh beef rather than frozen patties in some burgers at thousands of restaurants, a switch it first announced about a year ago as it works to appeal to customers who want fresher foods. (AP Photo/Mike Stewart)

CHICAGO (AP) — Following years of reformulating at McDonald's, most of the burgers it serves in the U.S. are now preservative-free.

As of Wednesday, the world's largest burger chain says classics like the Big Mac and Quarter Pounder with Cheese are preservative-free, with reformulated buns and sauces. Pickles on the sandwiches still contain artificial preservatives, but customers can request sandwiches without pickles.

McDonald's has been gradually removing preservatives from its menu for several years in an effort to appeal to more health-conscious buyers. In 2016, it removed high-fructose corn syrup from its buns and took artificial preservatives out of its Chicken McNuggets.

The Chicago-based company says around one-third of its sandwiches still have artificial colors, flavors or preservatives, including Egg McMuffins and Filet-O-Fish. It hasn't set a timeline for removing those ingredients.

The shifting numbers for almonds show how the figures printed on nutrition labels may not be as precise as they seem.
Candice Choi
Feb 4th, 2020

The program will provide curriculum on the ecology of microorganisms and pathogens in foods, and what measures are used to prevent their growth.
University of Nebraska-Lincoln
Feb 4th, 2020

The product was shipped to a single distribution location in Iowa, which then distributed the product to institutions, including schools.
USDA
Dec 23rd, 2019

Scientists don't know much about the domestication of microbes, and as a result, society fails to appreciate their pivotal contributions to the foods and drinks that we enjoy all year long.
Antonis Rokas
Dec 19th, 2019

This partnership represents the first time in vitro oral processing will be applied in the category of meat analogs.
Motif FoodWorks
Dec 12th, 2019

At the heart of the matter for the Italian company are hazelnuts grown in Turkey.
Associated Press
Dec 6th, 2019