Vernon Hugh Bowman figured out a way to benefit from a high-technology product — soybeans that are resistant to weed-killers — without always paying the high price that such genetically engineered seeds typically bring. In so doing, he ignited a legal fight with seed-giant Monsanto Co. that has now come before the Supreme Court, with arguments taking place Tuesday. 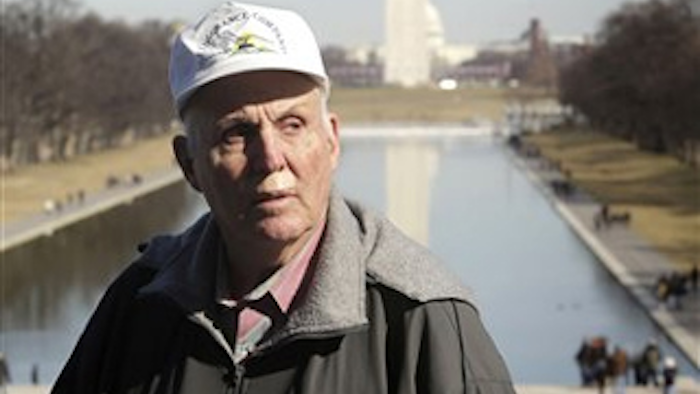 WASHINGTON (AP) — Vernon Hugh Bowman seems comfortable with the old way of doing things, right down to the rotary-dial telephone he said he was using in a conference call with reporters.

But the 75-year-old Indiana farmer figured out a way to benefit from a high-technology product — soybeans that are resistant to weed-killers — without always paying the high price that such genetically engineered seeds typically bring. In so doing, he ignited a legal fight with seed-giant Monsanto Co. that has now come before the Supreme Court, with arguments taking place Tuesday.

The court case poses the question of whether Bowman's actions violated the patent rights held by Monsanto, which developed soybean and other seeds that survive when farmers spray their fields with the company's Roundup brand weed-killer. The seeds dominate American agriculture, including in Indiana, where more than 90 percent of soybeans are "Roundup Ready."

Monsanto has attracted a bushel of researchers, universities and other agribusiness concerns to its side because they fear a decision in favor of Bowman would leave their own technological innovations open to poaching. The company's allies even include a company that is embroiled in a separate legal battle with Monsanto over one of the patents at issue in the Bowman case.

The Obama administration also backs Monsanto, having earlier urged the court to stay out of the case because of the potential for far-reaching implications for patents involving DNA molecules, nanotechnologies and other self-replicating technologies.

Monsanto's opponents argue that the company has tried to use patent law to control the supply of seeds for soybeans, corn, cotton, canola, sugar beets and alfalfa. The result has been a dramatic rise in seed prices and reduced options for farmers, according to the Center for Food Safety. The group opposes the spread of genetically engineered crops and says their benefits have been grossly overstated.

Consumer groups and organic food producers have fought Monsanto over genetically engineered farm and food issues in several settings. They lost a campaign in California last year to require labels on most genetically engineered processed foods and produce. Monsanto and other food and chemical companies spent more than $40 million to defeat the ballot measure.

Monsanto says the success of its seeds is proof of their value. By and large, "farmers appreciate what we do," David Snively, Monsanto's top lawyer, said in an interview with The Associated Press.

Herbicide-resistant soybean seeds first hit the market in 1996. To protect its investment in their development, Monsanto has a policy that prohibits farmers from saving or reusing the seeds once the crop is grown. Farmers must buy new seeds every year.

Like almost every other farmer in Indiana. Bowman used the patented seeds for his main crop. But for a risky, late-season crop on his 300 acres in Sandborn, about 100 miles southwest of Indianapolis, Bowman said, "I wanted a cheap source of seed."

He couldn't reuse his own beans or buy seeds from other farmers who had similar agreements with Monsanto and other companies licensed to sell genetically engineered seeds. And dealers he used to buy cheap seed from no longer carry the unmodified seeds.

So Bowman found what looked like a loophole and went to a grain elevator that held soybeans it typically sells for feed, milling and other uses, but not as seed.

Bowman reasoned that most of those soybeans also would be resistant to weed killers, as they initially came from herbicide-resistant seeds too. He was right, and he repeated the practice over eight years.

He didn't try to keep it a secret from Monsanto, and in October 2007 the company sued him for violating its patent. Bowman's is one of 146 lawsuits Monsanto has filed since 1996 claiming unauthorized use of its Roundup Ready seeds, Snively said.

A federal court in Indiana sided with Monsanto and awarded the company $84,456 for Bowman's unlicensed use of Monsanto's technology. The federal appeals court in Washington that handles all appeals in patent cases upheld the award. The appeals court said farmers may never replant Roundup Ready seeds without running afoul of Monsanto's patents.

The Supreme Court will grapple with the limit of Monsanto's patent rights, whether they stop with the sale of the first crop of beans or extend to each new crop soybean farmers grow that has the gene modification that allows it to withstand the application of weed killer.

The company sees Bowman's actions as a threat both to its Roundup Ready line of seeds and to other innovations that could be easily and cheaply reproduced if they were not protected.

"This case really is about 21st century technologies," Snively said.

Bowman and his allies say Monsanto's legal claims amount to an effort to bully farmers.

"So seed-saving would have no impact on the majority of Monsanto's seed revenue," he said.