The 1999 settlement of the Pigford v. Glickman lawsuit provided about $1 billion to 15,000 farmers who say the agency unfairly turned them down for loans because of their race between 1981 and 1996. 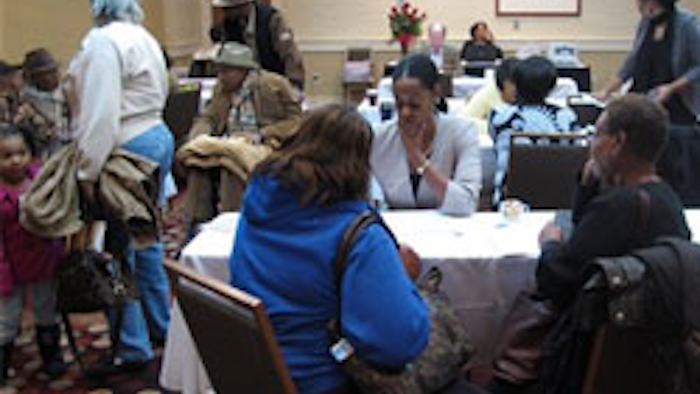 MEMPHIS, Tenn. (AP) — When Roy James needed money to buy equipment and dig an irrigation well for his father's Mississippi farm, he applied for a loan from the U.S. Department of Agriculture — but was turned down.

The USDA said it denied the application filed in 1995 because James had inadequate education and didn't have farming experience — even though he had a college degree and had worked for years on the farm that grows soybean, wheat and cotton.

"I couldn't understand why they turned me down," James said. "It was confusing."

He became more frustrated when he found out he missed a deadline to take part in a settlement reached by black farmers with the USDA over discrimination claims. The 1999 settlement of the Pigford v. Glickman lawsuit provided about $1 billion to 15,000 farmers who say the agency unfairly turned them down for loans because of their race between 1981 and 1996.

James said he missed the deadline because he did not find out in time, but he still filed a late claim. Thousands of other black farmers did the same — a move that may result in a payout, after all.

A second settlement approved by a court in October 2011 is giving another chance to black farmers with discrimination claims from that era who were left out of the first Pigford settlement. Farmers who filed a late claim for the first settlement — or their relatives — have until May 11 to file a new claim for thousands of dollars.

Lawyers involved in the case believe that 40,000 to 65,000 black farmers are eligible to claim about $1.2 billion under a bill signed by President Barack Obama.

Thousands have already filed claims, and advocates say payouts could be as high as $250,000 in some cases. Factors that determine how much each claimant gets include the level of damages and losses they experienced, and, because there is a limited pool of money available, how many farmers end up applying.

A panel of people who are not part of the lawsuit or the USDA will decide if claimants are eligible.

The Pigford settlements are viewed as a victory by many. But one group that advocates for black farmers says they are a figurative slap in the face because they don't cover a long enough time period and claimants give up the right to appeal if they are denied.

LaSalle Dudley, 72, filed a claim on behalf of his deceased older sister and her husband, who were denied a loan in the early 1980s for their cotton farm near Senatobia, Miss. The loan was intended to buy machinery so Dudley's brother-in-law could give up manual farming and expand the business. Instead, because the loan was denied, they were unable to produce enough crops and had to close the farm.

Dudley said he hopes to get about $35,000 and would share any money with his brother. He said the claim is a good way to honor his sister.

"They owned the property for so long, and really I would have loved for it to have remained in the family," Dudley said. "I would tell people not to be ashamed or fearful coming forward with what they know happened."

Black farmers were prominent in the 1920s, when they owned 15 million acres of farmland, said John Zippert, director of program operations for the Federation of Southern Cooperatives.

But as years passed and they sought loans to maintain or expand their businesses, many faced adversity. Black farmers seeking loans from the USDA were often turned down for no explicit reason or were approved for much lower sums than they needed. As a result, they had to reduce the size of their farms or sell their properties.

"The USDA presented itself as the lenders of last resort, but in terms of black farmers, they didn't fulfill that promise in many cases," Zippert said. "Many small black farmers because they couldn't get access to USDA credit and other support, had to go out of the farming business."

Today, black farmers own between 3 and 4 million acres of U.S. farmland, according to Zippert, whose organization represented farmers in the Pigford settlements. Alabama, Mississippi, Georgia, North Carolina and South Carolina have the highest numbers of black-owned farms, Zippert said.

As properties have gotten smaller, many black farmers have abandoned traditional row crops such as corn, cotton and wheat. Now, many are growing fruits like watermelon and mangoes and vegetables such as peas and okra because they carry a higher income per acre, Zippert said.

To be eligible for money under the recent settlement, a black farmer needs to have sought a loan for his farm between 1981 and 1996. They also must have registered a written or verbal complaint about any discriminatory treatment they experienced.

Also, applicants must be farmers who missed the initial Sept. 15, 2000 deadline and filed a late claim for the first settlement. Zippert said that many did not receive adequate notice of their eligibility.

In cases where eligible farmers have died, their heirs can make claims. In all, about 65,000 black farmers submitted a late claim for the original Pigford settlement, Zippert said.

"It's not a general re-opening of the case, and that's caused some confusion," Zippert said. "You have people who think that because their parents farmed in the 1940s ... that they are eligible for this, and they aren't."

Francis said his law firm called Morgan & Morgan does not charge those who file a claim. Lawyers' fees are paid by the court.

"No potential claimant should be paying anyone either for a claim form or for assistance in filling out a claims form," Francis said.

Thomas Burrell, president of the Memphis-based Black Farmers and Agriculturalists Association, argues that money should be available to any black farmer with a legitimate claim of discrimination, not just the late applicants from the original Pigford settlement.

Burrell also said it is unfair because it requires black farmers to forever waive their right to appeal if they are not approved.