Missouri farmer Terry Durham, who oversees one of the nation's largest commercial elderberry farms on 37 acres of Missouri River bottomlands, believes the crop has huge potential as Americans continue to tap into the medicinal properties of food. 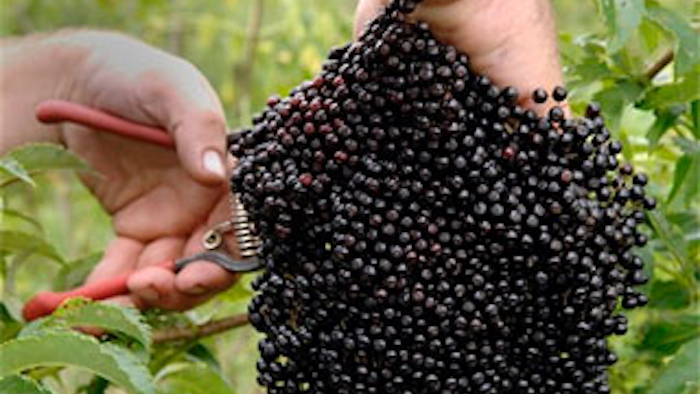 HARTSBURG, Mo. (AP) — Missouri farmer Terry Durham is among those willing to bet the next hot food crop will be a berry now more commonly found in roadside ditches than supermarket shelves.

Folk healers have long used elderberries to concoct herbal remedies, but the federal government is now investing millions of dollars in studying their potential medicinal benefits. At the same time, the berries are enjoying increased popularity among gourmands ready to pay top dollar for locally grown produce.

Those factors have created interest among farmers and potential farmers. More than 150 from Missouri and seven other states gathered earlier this month for a workshop organized by Durham and sponsored by the University of Missouri's Horticulture and Agroforestry Research Center.

Durham, who oversees one of the nation's largest commercial elderberry farms on 37 acres of Missouri River bottomlands, believes the crop has huge potential as Americans continue to tap into the medicinal properties of food. Elderberries have long been used in herbal teas and cough syrups.

"We had all this history, and knew that it worked," said Durham, who farms in the 104-person village of Hartsburg. "But we didn't have the science."

The National Institutes of Health has given five universities a total of $37.5 million for a five-year study exploring possible medical benefits of elderberries, wild yams and other herbal and dietary supplements. One of the recipients is the University of Missouri's Center for Botanical Interaction Studies, where researchers are in the early stages of studying the antioxidant-rich elderberry's effect fighting prostate cancer.

"You've got 5,000 years of human lore that says this plant is good for human disease," said biochemist Dennis Lubahn, who operates the center. "This is an extraordinarily rich area for research."

Most elderberries used now in foods and herbal remedies still come from Europe, and there are some hurdles for those hoping to grown them in the United States. The dark purple and black berries must be picked by hand — the plant's stems and leaves are toxic to humans.

Durham is working to refine a mechanized process for picking the berries and to expand a growers cooperative that links small producers with a network of buyers, while also providing farmers with growing tips and other resources. The co-op, known as River Halls Harvest, also produces elderberry juices, jelly and a "throat coat" cordial for the cold and flu season.

Dana Boyle, a pharmacist from Snellville, Ga., attended the Missouri workshop, where participants learned the latest in elderberry pest prevention, propagation and pruning methods. They also were introduced to two new varieties that have emerged from Missouri field tests as hearty alternatives to those developed decades ago for the far different climates of New York and Nova Scotia.

Boyle hopes to start her own berry orchard. A member of Slow Food Atlanta, she said the city's chefs are eager to tap into new tastes and fresh ingredients for customers seeking a farm-to-table experience. At the workshop, she and others dined on pulled pork with elderberry barbecue sauce, spread dollops of elderberry-infused butter on dinner rolls and washed down the meal with elderberry tea.

"You can see all kinds of things on their medication (charts)," she said.

Lubahn the university researcher, emphasized it's far too early to know whether elderberries have real medicinal benefits. But intuition tells him the early settlers and ancient cultures that relied on the plant — Hippocrates is said to have referred to the elderberry bush as his "medicine chest" — were on to something.

"You have all these cultures around the world using herbs to treat diseases," he said. "Forty to 50 percent of prescription drugs are originally derived from plants. ... The idea that there aren't any new (treatments) to be found in plants is silly."