Small fruit and vegetable farmers throughout the Midwest are struggling with unusual heat and a once-in-decades drought. 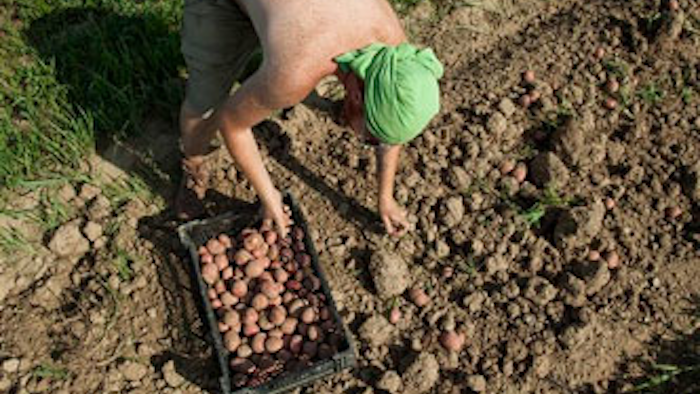 WEST ALLIS, Wis. (AP) — Chris Covelli planted 1,000 zucchini seeds on his farm in southern Wisconsin this spring. Only a quarter sprouted in the parched soil. A few weeks later, he planted 1,000 more seeds and doubled his irrigation. This time, nothing came up.

Covelli also lost his broccoli and green beans to the drought that now covers two-thirds of the nation. Under pressure to fill the boxes he delivers weekly to families who buy annual subscriptions of produce, he recently threw in purslane, which he describes as a vitamin-rich, "delicious weed" that tastes like lettuce.

Small fruit and vegetable farmers throughout the Midwest are struggling with unusual heat and a once-in-decades drought. Some have lost crops, while others are paying more to irrigate. Most aren't growing enough to sell profitably to wholesalers, and sales at farmers markets are down. Those with community supported agriculture programs, or CSAs, are looking for ways to keep members happy, or at least satisfied enough that they'll sign up again next year.

Covelli said he and his crew have spent every day in the field, often in 100-degree heat, in an effort to deliver the vegetables promised to families who pay $14 to $45 per week. So far, he said, they've delivered most of what they promised, although they've had to get creative with the addition of drought-hardy items like purslane.

"There's no secret," said Covelli, who owns Tomato Mountain Farms in Brooklyn, Wis. "You just do what you have to do. If that means doing more plantings, trying different crops, waking up at 2 a.m. to move the irrigation pipe, we do it. That's what hard work is."

Other farmers have not fared as well. Bob Borchardt, who co-owns Harvest Moon Farms in Viroqua, Wis., lost most of his greens, including chard and kale. He also runs a CSA, but said thus far, he's only been able to deliver about 20 percent of what he planned. He hopes to make it up to members when his heirloom tomatoes come in next month.

Meanwhile, he's been in dire need of cash. To tide him over, he sold "sponsorships" of two fields for a total of $5,000. The Illinois family who bought the sponsorships will be able to pick from the field, be treated to a home-cooked meal on the land and have a corporate logo or family portrait posted among the plants.

"We're not out of the woods yet, but we are optimistic," Borchardt said. "All we're thinking about now is getting through this year and staying in business."

Unlike farmers who grow corn, soybeans and other crops sold as commodities, vegetable farmers don't have insurance to cover them in case of drought or flooding.

But even those who have vegetables to sell say it has been a bad year.

Anna Ertl, whose family runs a farm in Raymond, Wis., near the Illinois border, shook her head as she watched a trickle of customers meander through a farmers market in the Milwaukee suburb of West Allis. In front of her was a table with pickles, sweet onions and several dozen zucchinis.

"You hear so much bad stuff in the media (about harvests), but people need to come down here and see what we have," Ertl said. "This is our livelihood. This is how we survive."

Dan Koralewski, who oversees operations at the West Allis Farmers Market, said 5,000 to 6,000 customers generally show up during peak season in mid-July, but attendance seemed to be about half that this year. He blamed a combination of customer skepticism and hot weather that kept many people in the cooler indoors.

Farmers markets in other Midwestern states also reported fewer sales. In Plainfield, an Indiana town of about 27,000 residents, attendance at the local farmers market is down an estimated 20 to 30 percent, said Brad DuBois, the executive director of the Plainfield Chamber of Commerce Farmers Market.

Bryan Robbins, who runs the Greensburg Decatur County farmers market in Indiana, said it experienced a similar drop in attendance in recent weeks, so he started a new program for elderly customers who may be leery of the heat.

Seniors can now pull up to a designated lane in the parking lot and hand over their shopping lists. Robbins or someone else will then fetch the products, allowing the customers to remain in their air-conditioned cars.

"That's one advantage of being a small market in a small community," said Robbins, whose market typically draws 700 to 800 people. "Not everyone else can do that."