Farmers Markets Sprout Up Across America

After 18 years of steady increases, the number of farmers markets across the country now registered with the USDA is 7,864. In 1994, there were 1,744. 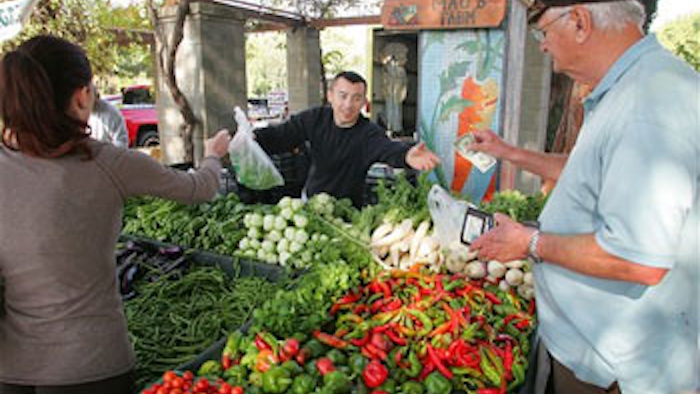 FRESNO, Calif. (AP) — As demand for locally grown fruits and vegetables has increased, so too has the number of urban farmers markets sprouting up across the nation.

The U.S. Department of Agriculture will announce Friday that the number of direct-sales markets has increased 9.6 percent in the past year, with California and New York leading the way.

"Farmers markets are a critical ingredient to our nation's food system," USDA Deputy Secretary Kathleen Merrigan said. "These outlets provide benefits not only to the farmers looking for important income opportunities, but also to the communities looking for fresh, healthy foods."

After 18 years of steady increases, the number of farmers markets across the country now registered with the USDA is 7,864. In 1994, there were 1,744.

Today, some markets are so popular that there are wait lists for farmers to sell there, including one of the largest and most diverse of all, the Ferry Plaza Farmers Market in San Francisco. Farmers from across the region travel there three days a week to sell fruits, vegetables and artisan breads and cheeses to thousands of shoppers, including top chefs from the food-centric city.

Operated by the Center for Urban Education about Sustainable Agriculture, the iconic market on the San Francisco Bay is celebrating its 20th birthday.

"When we started there were only three markets in the city, and now there are 29," said Liz Hunt, a center spokeswoman.

Grant Brians of Heirloom Organic Gardens sells more than 200 old-fashioned varieties of vegetables, herbs and fruit grown on two farms in San Benito County, about 100 miles south of San Francisco. Others bring in stone fruits from the San Joaquin Valley, and berries from the coast.

"Every day eaters have the opportunity to vote with their forks and support small-scale farmers, investing resources in their communities, stimulating their local economies, and keeping ag land in sustainable production," he said.

The center uses the markets to educate consumers about unique varieties of produce and how to prepare them. Stockdale said the growing interest in farmers markets has prompted others to ask the center for help creating educational programs.

The USDA has worked to make the markets accessible to people of all income levels by outfitting more with the ability to accept payments from the Supplemental Nutrition Assistance Program, formerly known as food stamps. More than $4 million is being made available to equip markets with wireless point-of-sale equipment.

California, the country's top agricultural producing state, has 827 markets, according to the USDA. New York has 647, more than double the next most prolific state, Massachusetts, which has 313.

The mid-Atlantic, Northeast and Southeast saw the biggest percentage growth in markets, reporting 15.8, 14.4 and 13.1 percent jumps in participation.

The USDA website lists farmers markets with links to their websites. It also allows users to search by zip code to make finding nearby markets easier.