A battle between grocers and potato growers has been silently hitting shoppers' pocketbooks, according to a U.S. wholesaler accusing America's spud farmers of driving up prices while spying on farmers with satellites and aircraft fly-overs to enforce strict limits on how many tubers they can grow. 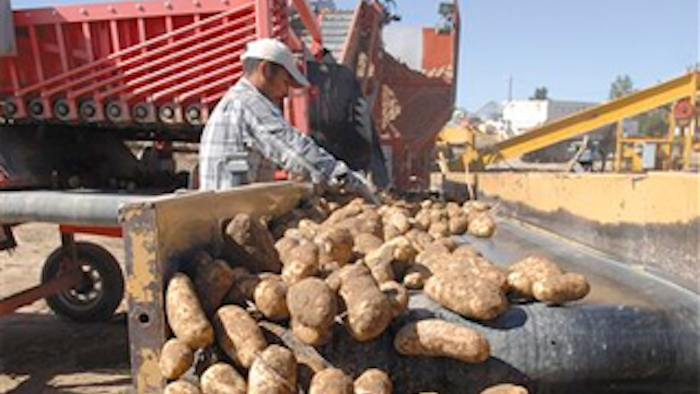 BOISE, Idaho (AP) — A battle between grocers and potato growers has been silently hitting shoppers' pocketbooks, according to a U.S. wholesaler accusing America's spud farmers of driving up prices while spying on farmers with satellites and aircraft fly-overs to enforce strict limits on how many tubers they can grow.

Associated Wholesale Grocers' lawsuit against United Potato Growers of America and two dozen other defendants was shifted this week to U.S. District Court in Idaho, America's top potato-producing state with 30 percent of the nation's supply.

It's unclear how much the alleged price-fixing has bumped up the cost of frozen french fries or a steaming spud served with a steak, but the case isn't small potatoes: They're America's most popular vegetable, worth billions in sales each year, and their journey from the field to the table is complex. Farmers trying to make a profit dependent on weather, water and fuel costs are pitted against grocers who worry they're getting gouged.

And while the U.S. Department of Justice hasn't joined this case, its lawyers have been examining how large, modern agricultural cooperatives like the United Potato Growers are employing nearly century-old antitrust exemptions to strengthen their hands.

In this lawsuit, the Kansas-based grocers association, a cooperative supplying more than 2,000 stores including IGA, Thriftway and Price Chopper in 24 states, contends potato growers have banded together for a decade to illegally inflate prices in a scheme akin to the petroleum-producing OPEC cartel, reducing planting acreages and destroying potatoes to restrict what is available for sale.

"UPGA utilized predatory conduct and coercive conduct in ensuring compliance with the price-fixing scheme," according to the lawsuit, which alleges tactics including use of "satellite imagery, fly-overs, GPS systems, and other methods to enforce its agreement to reduce potato supply."

The grocers are asking for triple damages, likely in the millions, and are focusing on growers of fresh potato varieties found in big bags, as well as potatoes processed into crinkle-cut fries, Tater Tots and other products and sold in freezer sections of the group's stores.

United Potato Growers of America's Salt Lake City-based attorney, Randon Wilson, contends his group is shielded by the Capper-Volstead Act. The 1922 federal law was meant as a limited exemption from antitrust rules for agricultural cooperatives, while still aiming to protect consumers from unduly high prices that could accompany a monopoly.

"Right from the beginning, we did everything right, to qualify for Capper-Volstead," Wilson said. "We know what you have to do to qualify for that limited exemption and we followed all those rules."

Dell Raybould, an owner of Raybould Farms and a Republican state representative, is a member of the co-op and has also been named in the lawsuit.

Raybould, who grows Russet Burbanks and Norkotah Russets on 850 acres near Rexburg in Idaho's far east, paints a bleak picture of potato farming before 2004: A haphazard industry where farmers inevitably grew too many tubers, pushing prices into the cellar.

"I can remember when people hauled their potatoes out in the field with the manure spreader, dumped them and plowed them under," said Raybould, who has been growing potatoes since 1953. "They did try to level out production, so we didn't have the boom and bust thing all the time. And when they did, the co-op, they went about this the right way. They got the best co-op attorney in the nation, and they did it right."

However, Associated Wholesale Grocers contends the growers illegally sought to boost the price of potatoes.

At secret meetings in Idaho Falls, according to the complaint, big Idaho growers like Albert Wada and members of the Raybould family, as well as North Dakota ag-multimillionaire Ronald Offutt, worked with Wilson to hatch a far-reaching price-fixing scheme, creating a powerful agricultural juggernaut capable of squeezing buyers.

"None of the defendants ... is entitled to the limited protections found in the Capper-Volstead Act for their efforts to restrict potato supply and fix prices," wrote Patrick J. Stueve, the grocers' lawyer in Kansas City.

Though the Justice Department didn't return a phone call seeking comment Thursday, it's clear Stueve's basic contention — that Capper-Volstead is being used to illegally inflate potato prices — has emerged as an issue.

The DOJ and U.S. Department of Agriculture held workshops in 2010 on large agricultural cooperatives and their use of the law. Litigation has been mounting, too.

A similar federal lawsuit filed in 2010 targeting potato growers is now advancing in Idaho, a case that may eventually be combined with this one.

Meanwhile, antitrust complaints, including from the DOJ, have been lodged against mushroom growers, dairy farmers, egg producers and the cranberry industry.

Peter Carstensen, a University of Wisconsin Law School professor in Madison who focuses on antitrust cases, said a common gulf separates rival protagonists: On one side, large agricultural producers argue they're legitimately using the power of the cooperative to create a more efficient market, while grocers and the government contend they're inappropriately exploiting their antitrust protections.

"Capper-Volstead was designed primarily to facilitate more efficient marketing of agricultural products," Carstensen said. "There's an increasing perception that Capper-Volstead is being abused."

If you’re a dog and watching this, it’s highly likely that you’re unemployed.
Apr 20th, 2021

The customers, both from the San Francisco area, allege that the ingredient in question is "anything but tuna."
Jan 29th, 2021
Follow Us
Most Recent