Two counties shut down gun and ammunition stores as non-essential businesses during the early days of the pandemic. 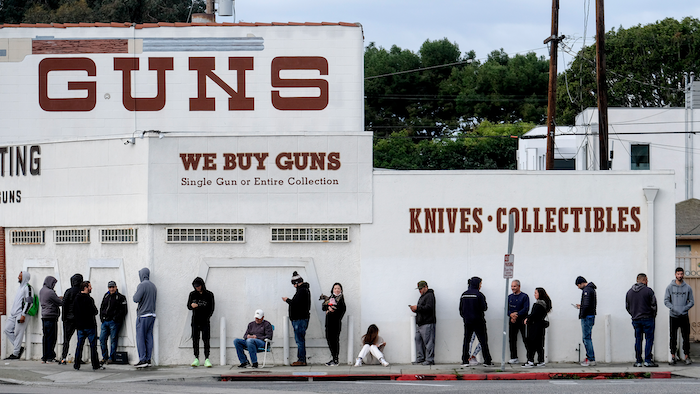 SACRAMENTO, Calif. (AP) — Two California counties violated the Constitution's right to keep and bear arms when they shut down gun and ammunition stores in 2020 as nonessential businesses during the coronavirus pandemic, a federal appeals court ruled Thursday.

Officials in Los Angeles and Ventura counties had separately won lower court decisions saying gun stores were not exempt from broader shutdown orders aimed at limiting the spread of the coronavirus early in the pandemic.

A three-judge panel of the 9th U.S. Circuit Court of Appeals rejected both lower court rulings.

The Second Amendment “means nothing if the government can prohibit all persons from acquiring any firearm or ammunition,” Judge Lawrence VanDyke wrote. "But that’s what happened in this case."

Because buyers can obtain guns only by personally going to gun stores in California, Ventura County’s 48-day closure of gun shops, ammunition shops and firing ranges “wholly prevented law-abiding citizens in the County from realizing their right to keep and bear arms,” he wrote.

This, he noted, while bike shops were among those allowed to remain open as essential businesses. The panel adopted the same reasoning in the Los Angeles County case, though the closure there was for 11 days.

The decision holds that governments "cannot use a crisis to trample on the Constitutional rights of citizens,” said Michael Jean, director of the National Rifle Association's Office of Litigation Counsel that sued in the Los Angeles County case. It also sued Alameda, Contra Costa, Santa Clara and San Mateo counties over their restrictions in Northern California, but the last three were dismissed from the lawsuit when they repealed their orders.

Three gun-owner rights groups and several individuals and businesses had sought to overturn the lower court rulings in California.

Ventura County “believes the case was correctly decided at the District Court level and is disappointed with the three-judge panel’s decision,” county spokeswoman Ashley Bautista said in an email. Officials are reviewing the decision and “evaluating our options and next steps.”

Losing parties can generally ask the full 9th Circuit to review the ruling by the three judges, or petition the U.S. Supreme Court. The nation's high court has been deemed more sympathetic to gun owners in recent years.

Firearms Policy Coalition vice president of programs Adam Kraut said in a statement that the cases resulted “when authoritarian governments used COVID as an excuse to attack Second Amendment rights.”

The 9th Circuit opinions "confirm our claims that the COVID closures of gun stores and firing ranges violated the Second Amendment rights of Californians,” he said.