Thousands of farmers are protesting reforms they say could devastate crop prices and reduce their earnings. 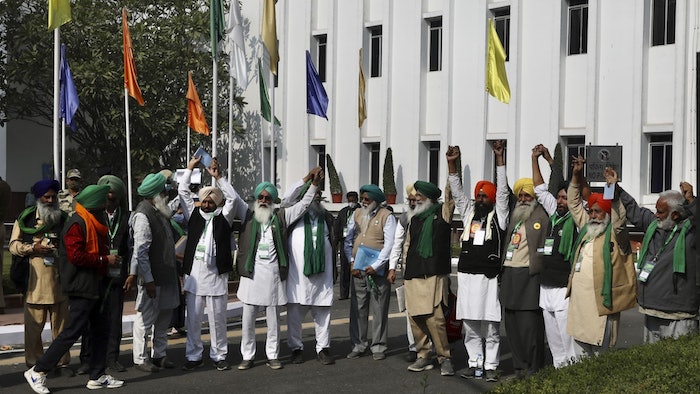 Representatives of various farmers organizations hold hands before the media as they arrive for talks with the government representatives in New Delhi, India on Thursday, Dec. 3.
AP Photo/Manish Swarup

NEW DELHI (AP) — The Indian government and protesting farmers reported some progress in talks Thursday and agreed to meet again over the weekend to discuss a blockade of key highways leading to the capital by thousands of farmers angry over new agriculture laws.

Agriculture Minister Narendra Singh Tomar said the government is open to remedying the farmers' grievances and is hopeful a solution will be found at Saturday’s meeting.

Thursday’s talks between Tomar and 35 leaders of the farmers, the second in three days, lasted over seven hours. They met in a tense atmosphere and the leaders didn't join government representatives for lunch.

Thousands of farmers are protesting reforms they say could devastate crop prices and reduce their earnings. They have blocked highways on the outskirts of New Delhi since last Friday.

The farmers say the laws passed in September will lead the government to stop buying grain at minimum guaranteed prices and result in exploitation by corporations who will push down prices.

Tomar said he assured the farmers that the minimum prices for grains will continue and land belonging to farmers will also be protected.

Rakesh Tikait, a leader of the farmers, told reporters he saw some softening of the government's stand on their demands.

However, Kuldip Singh, another leader, said the farmers will not back down from their demand for the repeal of the laws. ”Our movement will continue," he said.

Prime Minister Narendra Modi’s government insists the reforms will benefit farmers. It says they will allow farmers to market their produce and boost production through private investment.

Farmers have been protesting the laws for nearly two months in Punjab and Haryana states. The situation escalated last week when tens of thousands marched to New Delhi, where they clashed with police, who used tear gas, water cannons and batons against them.

The farmers are camping along at least five major highways on the outskirts of the capital and have said they won’t leave until the government rolls back what they call the “black laws.”