China Deal Might Not Bail Out Lobster Industry This Year

The market for China might come back, but it's not coming back swiftly, or all at once. 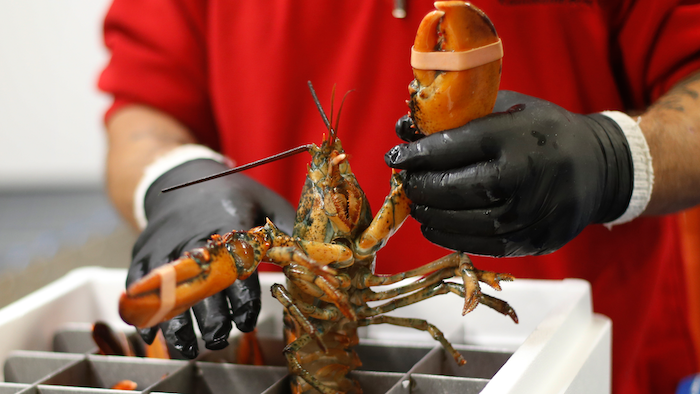 In this Sept. 11, 2018 file photo, a live lobster is packed into a cooler for shipment to China at The Lobster Company in Arundel, ME.
AP Photo/Robert F. Bukaty, files

PORTLAND, ME (AP) — American seafood exporters are optimistic that a new trade deal with China will allow them to claw back into one of the world's biggest markets for lobster, but help might not have arrived in time for the biggest day on the calendar.

The busiest season for lobster exports to China is around Chinese New Year, which took place Saturday. Lobsters have exploded in popularity as the middle class has grown in China, where red is considered a lucky color. And lobsters, of course, turn bright red when cooked.

But President Donald Trump's trade hostilities with China led to tariffs in 2018 that cratered the U.S. lobster export market, while Canada's surged. A new trade deal between the U.S. and China announced on Jan. 15 is designed in part to give American exporters of seafood, especially lobsters, renewed access to China.

The market for China might come back, but it's not coming back swiftly, or all at once, said Stephanie Nadeau, a Maine exporter who owns The Lobster Co. in Arundel.

“It's not like you're going to get back all your business,” Nadeau said. “But it would help.”

January is typically another heavy export month for lobsters. America sent more than $22 million in lobsters to China in January 2018, about six months before the tariffs were applied. The figure fell to less than $9 million in January 2019.

The Maine Lobster Dealers' Association supports improved trade relations with China, but it's “unclear how this is going to play out in the market right now,” said Annie Tselikis, the group's executive director.

One of the biggest remaining questions is just how much of the Chinese market American seafood exporters will get back. That will determine how much of a role the Chinese New Year rush plays in future years.

The four members of the congressional delegation in Maine, the biggest lobster fishing state, sent a letter to U.S. Trade Representative Robert Lighthizer on Jan. 23 asking him to hold China to its commitment to the new trade deal. The letter said knowing an “exact dollar value of lobster that China has agreed to purchase will enable independent verification as to whether China either has met or again shirked its trade commitments” to the U.S.

“We urge the administration to work swiftly towards a phase-two solution that sees tariffs, import and export, removed so jobs in all sectors of the American seafood community benefit,” he said.