An animal welfare group accessed a hog farm last spring owned by an Iowa senator and recorded disturbing conditions on video and in photos. 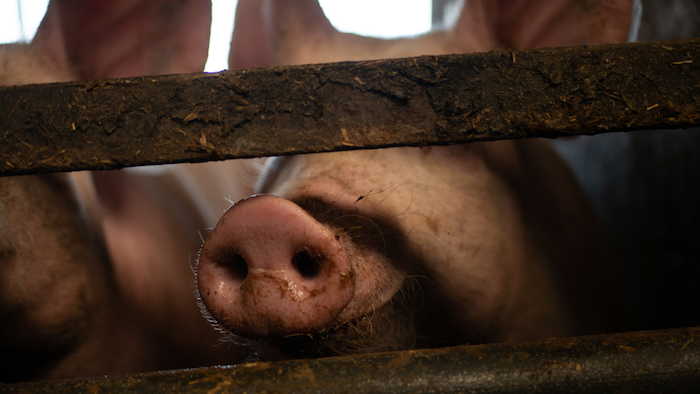 DES MOINES, IA (AP) — An animal welfare group gained access to an Iowa state lawmaker’s hog farm and has posted a video on the internet that shows pigs suffering and even dying in what appear to be inhumane conditions.

“Inside the barns, investigators documented months-old piglets suffering bloody rectal prolapses and intense overcrowding. They came across one piglet who was unable to stand, and gasped for air while thrashing wildly for several minutes, before eventually dying,” the group said in a statement.

Matt Johnson, one of those who entered the barn, said he submitted a complaint Thursday to the Iowa Department of Agriculture and local law enforcement after seeing conditions in the barn, which he contends constitute criminal animal neglect under Iowa law. Johnson declined to name the person who accompanied him.

The farm is operated by Rosewood Pork, a company owned by Rozenboom and his brother, Calvin Rozenboom. Johnson said he entered the barn on a night last April and entered through an unlocked door. The group delayed publicizing images so it couldn't be accused of contaminating the barn and hurting animals, as farmers have claimed after past investigations, Johnson said.

Ken Rozenboom, who farms near Oskaloosa, said in a statement that he and his brother were surprised and disappointed to learn of the allegations.

“The pictures indicate careless animal husbandry practices that violate acceptable animal care protocols, the very protocols that our family has carefully followed during a lifetime of animal care," he said. “What we saw in the pictures is not OK, and we took immediate steps to learn why this had occurred.”

Rozenboom said the barns were managed by another family under a lease in April so his family had no role in the management of the pigs at the time of the investigation.

He said the pigs were sick then with a respiratory illness that caused unpleasant symptoms and even death. He said it was clear proper care protocols were not being followed and while the pictures show poor housekeeping he denied there's any evidence of cruelty, neglect or abuse. He also denied overcrowding.

Rozenboom said his family began to take over management of the barns before they knew about the investigation, in part because of their own concerns.

The barns are now under his family's direct supervision, Rozenboom said, and he described them as bright and well-ventilated with the temperature controlled to keep pigs comfortable. He said the pigs always have ample space, fresh feed and clean water.

He promised that his family operation will monitor the changes made ”to make sure pigs under our care are well cared for to prevent future incidents of this type.”

Rozenboom said its disappointing that the animal welfare group recorded images more than nine months ago but failed to immediately tell anyone. He said the group broke trespass laws and risked spreading infectious disease into the barns. He said trespass charges will be filed against those who entered the barn without permission.

“This type of dangerous, illegal activity cannot be condoned,” he said.

Rozenboom, a senator since January 2013, managed a law passed last year that heightens the penalty to a year in jail for using deception to gain access to a farm to conduct an undercover investigation. The law also allows for a conspiracy charge that carries a similar penalty.

It was approved in March, just weeks after a federal judge struck down an earlier law targeted at stopping undercover investigations. Similar so-called ag gag laws also have been struck down in Idaho and Utah. Enforcement of the new law was ordered delayed in December by a federal judge until the court can determine its legality.

Johnson, who grew up in Iowa before moving to California three years ago, said it’s not unusual to have lawmakers in agricultural states take a personal interest in passing laws that protect their industry.

He said he wouldn’t be surprised if Rozenboom pursued trespass charges against him, but he defended his actions, saying uncovering what he considered animal neglect justifies entering the property.

“As an ordinary decent human being I believe people should see what’s going on here, regardless of the law,” he said.